Not one but three Roberts in Toronto–Arevalo, Downey and Duvall | Inquirer Entertainment
Close
menu
search

Not one but three Roberts in Toronto–Arevalo, Downey and Duvall 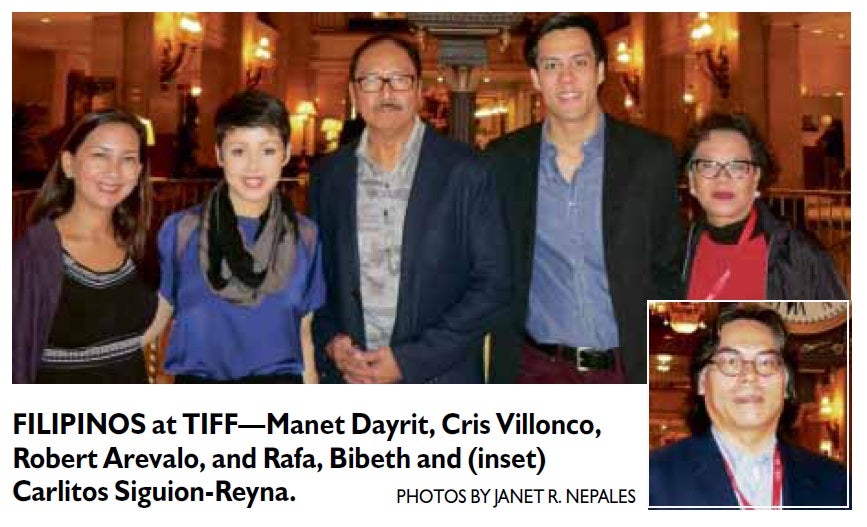 LOS ANGELES—I just attended the Toronto International Film Festival (TIFF) where the best joke, if you ask me, was dished by Robert Arevalo, who was in town with director Carlos Siguion-Reyna and several talents behind “Hari ng Tondo,” one of the Philippines’ entries.

Shared with me at first by the film’s writer, Bibeth Orteza, and recounted to me later by Robert himself, the story went like this: The actor, one of the finest the Philippine cinema has ever produced, learned from a Filipino chambermaid at the Fairmont Royal York Hotel that Robert Downey Jr. was also staying in the hotel.

Robert A smiled when I complimented him on his quick, humorous retort when I met him in the Fairmont Royal York’s lobby. I also congratulated Robert on his brilliant performance as a family patriarch, and his companions on the film which I saw at the recent Cinemalaya Philippine Independent Film Festival in Manila: fellow actors Cris Villonco and Rafael Siguion-Reyna, Bibeth and Manet Dayrit, who edited the movie.

Bibeth summed up her Toronto experience: “This has been a great TIFF. People who saw Carlitos’ last TIFF film in 2000 came to catch up on his work. We’re talking sales and distribution and going to other festivals.”

Robert A’s two tocayo—Downey, Jr. and Duvall—are compelling as father and son at odds with each other in David Dobkins’ TIFF drama entry, “The Judge.”

I rarely use the word “superb” but I will invoke it to describe Eddie Redmayne’s portrayal of genius astrophysicist Stephen Hawking in James Marsh’s standout TIFF entry, “The Theory of Everything.”

Capturing the essence of Stephen from his early 1960s student days at Cambridge to being diagnosed with a motor neuron disease which severely attacked his limbs, leaving him with limited speech and movement, Eddie not only inhabits the physically demanding role flawlessly. Using only his eyes, Eddie eloquently conveys a wide range of emotions, from devastation, frustration, anger to the occasional naughtiness and mirth, of Stephen as his body is stricken with the disease and forces him to use the wheelchair.

Also delineating a brilliant British mind is Benedict Cumberbatch in Norwegian director Morten Tyldum’s “The Imitation Game.” Benedict lives up to the challenge of essaying a complex man, Alan Turing, who cracked what were thought to be unbreakable codes of Germany’s World War II Enigma machine. Alan’s breakthrough shortened the war by two years and, as a result, saved thousands of lives.

Sadly, Alan, despite his achievement, was convicted for the criminal offense of homosexuality, under the laws that were in effect in 1950s UK.

Ted Melfi’s directorial debut, “St. Vincent,” offers several pleasures but Bill Murray is the chief reason to see it. Playing a curmudgeon who strikes an unlikely friendship with his neighbor, a young boy (Jaeden Lieberher, a wonderful discovery and match to Bill), the veteran actor is engaging to watch as a misunderstood man with a penchant for alcohol and horse race gambling.

Naomi Watts is winning and almost unrecognizable as a crass “lady who works at night,” as Jaeden’s 12-year-old character says in the film.

Justin raved, “‘These are cursed times,’ a man notes toward the end of ‘From What Is Before,’ and the full weight and meaning of those words come powerfully into focus across all five-and-a-half hours of Lav Diaz’s hauntingly beautiful new picture, which chronicles the gradual decline of a small coastal barrio in the Philippines in the final days before president Ferdinand Marcos imposed martial law in 1972.

“At once a vital work of historical reclamation and a sort of Southeast Asian companion piece to Michael Haneke’s ‘The White Ribbon’—another stark, black-and-white drama about mysterious acts of evil befalling a fragile community—this (is an) endlessly patient and contemplative work…Following Locarno (where the film won the Golden Leopard) and Toronto, fests will continue to feel the Lav.”

Joel Lamangan’s “Hustisya,” for which Nora Aunor won Cinemalaya’s best actress honors (Robert A won the best actor prize for “Hari ng Tondo”), also screened at TIFF, where it made its international premiere.