Imelda play in London has another PH actress 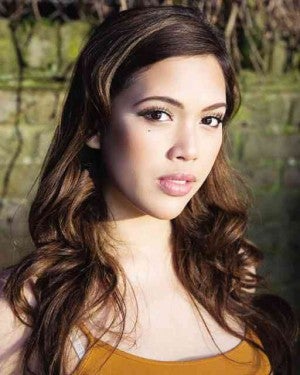 LOS ANGELES—Yet another Filipino actress has landed in  the West End. Christine Allado, who just finished a run in Tim Rice’s musical “From Here to Eternity,” is in the cast of the London production of David Byrne and Fatboy Slim’s acclaimed musical on Imelda Marcos, “Here Lies Love.”

Christine, among a batch of Filipino talents who once performed in Hong Kong Disneyland, is in the “Here Lies Love” ensemble and is also the understudy for the Imelda Marcos role (to be played by Natalie Mendoza). The actress, who went to St. Paul’s College, University of the Philippines Diliman and then London’s Royal Academy of Music (postgraduate in Music and Theater), is looking forward to the preview performances beginning Sept. 30. Official opening is on Oct. 13.

Dorfman Theatre at the National Theatre was refurbished to accommodate the play’s 360-degree staging, just like the entertaining and immersive production we saw in New York’s Public Theater. Alex Timbers again directs the show, which includes several Filipinos aside from Christine.

In “From Here to Eternity,” staged at Shaftesbury Theatre and filmed for cinema release, Christine played Minerva and was an understudy to the lead. She sang in the original cast recording. Below are excerpts from our e-mail interview:

How are the “Here Lies Love” rehearsals going?

They are incredibly intense, probably the fastest-paced I have ever experienced. In just a week and a half, we learned the whole show, song-wise, and we are already running half the show on stage with mics! It’s the first time I’m doing a show with crazy,  nonstop dancing.

I try my best to keep up mentally and physically—performing the meticulous choreography while doing a million costume changes. For a cast of about 16, we have 200 costumes!

How is “Here Lies Love” different from your previous projects?

One thing is that I get to work with Pinoys again! A few are old friends of mine, so it’s amazing. I’ve never called myself a dancer, but I have to become one for this!

How are you preparing as the understudy for the Imelda role and as part of the ensemble?

At the moment, I’m learning my ensemble stuff. I’ve learned all of Imelda’s songs and, when I can, I keep a close eye on Natalie and mentally work out her track, but I haven’t plotted it on paper. I’ve also started reading “The Untold Story of Imelda Marcos,” which is… the perspective that David Byrne is taking with the show.

How did you learn about making it to the West End production cast?

It was during my birthday dinner this year, when I was on holiday in Manila, having sushi in Makati. I yelped and told my mom, and then told everyone else in the room. It was a great birthday present!

How did your family react?

They immediately made plans to visit London to see the show.

How many auditions did you go through?

I auditioned in London with the casting team from the National Theatre. But I was going on holiday so I said I couldn’t make the final auditions. They asked where I was going and, when I said “the Philippines,” they said, “Perfect! We’ll see you there!” Now, that’s what I call fate!

Were you familiar with David Byrne’s music and “Here Lies Love” before auditioning?

I first heard about the concept album and liked the songs. When I heard there was going to be a West End production, I knew I had to be in it!

What’s it like rehearsing with Natalie and Mark Bautista (who plays Ferdinand Marcos) and the other Pinoys?

Natalie and Mark are lovely, to watch. It helps that everyone’s personalities just jived! Jim Ferrer and Aaron Jan (AJ) Mercado are friends of mine. I worked with AJ (in HK Disneyland) and went to theater classes with Jim back in the day.

I was just 18. It [was] the best way I could spend my last years as a teenager! I had to be fluent in Cantonese. I learned enough for the job in those two years!

Like Hong Kong, it’s such a mixed pot of people. It’s not a cheap lifestyle, though—one thing I miss about Hong Kong. But I love London.

Have you met the Filipino talents in “Miss Saigon”?

I worked with Ela Lisondra in Hong Kong as well. A few others were in “From Here to Eternity.”

What was it like acting in “From Here to Eternity”?

It was my first West End show. What a crazy, beautiful gift! It was such an enriching piece to be part of, and I will always thank the stars that director Tamara Harvey gave a fresh graduate the chance to be in it.

On press night… we received the most massive standing ovation that had me weeping during curtain call.

As understudy for the lead role Lorene, did you get to play it on certain nights?

I got one run of it, and it was a dream come true.

Did you meet Tim Rice?

Tim Rice was very much present nearly all the time. He is funny and quick-witted, always cheery and positive. He took us to dinner a few times. It was so cool to have him involved in 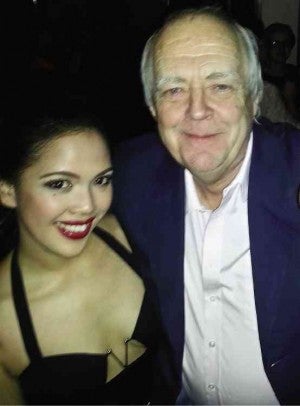 rehearsals and watch him revise song lyrics on the spot.

What are the other highlights from your previous London shows?

A memorable one is singing the “Seasons of Love” solo with the Royal Philharmonic Orchestra for the BBC.

At what age did you start performing in the Philippines?

I started doing gigs when I was 15. I did “Hairspray” with Atlantis and “Phantom of the Opera” in Baguio City. I joined a GMA 7 singing contest. After that, I moved to Hong Kong.

What shows or films inspired you to become a performer?

I saw “Miss Saigon” in Manila when I was very young and it was definitely one of the reasons that I fell in love with theater. Lea Salonga is definitely the epitome of perfection in our field.

What are your thoughts as you embark on this new adventure?

I’m always thankful and a bit surprised to be “playing” for a living. I never thought I would live off this career (I took up Business Administration in UP Diliman). I only hope that it stays this way!

What are your long-term plans, goals and dreams?

I do want to experience working in New York. But, for now, I’m more than happy to be in London. Also, I’m into another project at the moment—not theater-related but in the music industry. This could be the most exciting thing [for] me!