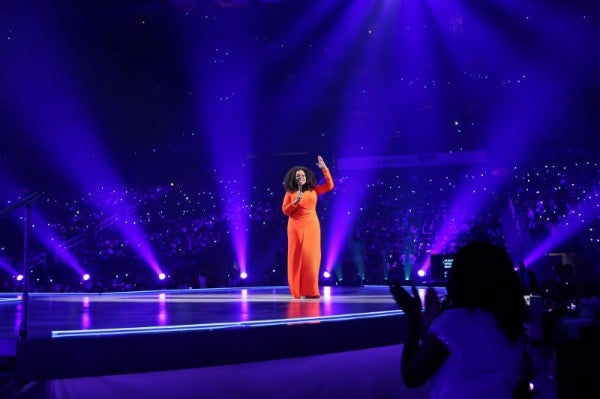 ATLANTA – Oprah Winfrey and a team of guests on Saturday completed the first stop of an eight-city U.S. tour of “Oprah’s The Life You Want Weekend,” rocking an Atlanta arena where thousands danced, applauded and sought inspiration for transforming their lives.

Atlanta was the opening city and featured Oprah and such guests as authors Deepak Chopra and Elizabeth Gilbert, inspirational speaker Iyanla Vanzant and pastor Rob Bell. A statement released by organizers said the arena tour was intended as a catalyst for a wider movement to engage, encourage and empower women.

Winfrey spoke about identifying one’s life purpose and led exercises on taking actions to reach those goals. At times there were funny reflections on life while other soul-searching moments led to crying as people considered areas in their lives they wished to change.

Thronged by thousands in a mostly female crowd, the Atlanta event that opened Friday was styled as somewhat of an intimate gathering with Oprah. She joked about how friends found it interesting that so many would attend her tour when she can’t sing or dance. Her comments drew laughter from the crowd.

At the end of two days in Atlanta, Oprah teared up as she thanked the audience for trusting that “this was worthy of you spending your hard-earned money to be here” and by telling the audience at the end: “Together we rise.”

Dr. Joe Bianco, an emergency room doctor from Isles of Palm, South Carolina, brought his wife Melissa to the event as a birthday present. He said he thought it touched many and people would be increasingly talking about the tour on social media as it travels to other cities. Of the speakers and guests, he said: “All these people came from very little and built an empire from what they were thinking.”