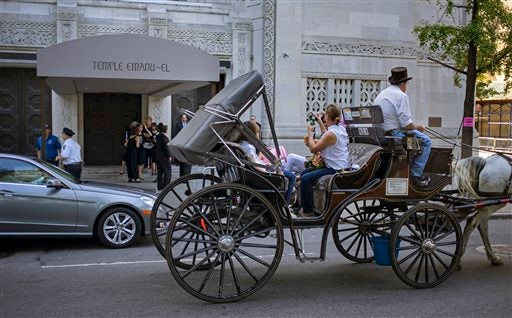 People in a horse and carriage pass as attendees arrive at a funeral service for comedian Joan Rivers at Temple Emanu-El in New York, Sunday, Sept. 7, 2014. Rivers died Thursday, Sept. 4, 2014. She was 81. AP PHOTO/CRAIG RUTTLE

The service at one of America’s oldest reform synagogues was by invitation only. Police shut down the sidewalk and PR women armed with clipboards checked guests’ IDs.

A huge scrum of paparazzi, TV cameras and journalists camped out across the street and hundreds of fans lined the street five or six deep to watch guests arrive from behind metal railings.

Rivers, 81, died on Thursday in hospital a week after she stopped breathing during a medical procedure on her vocal cords at a private clinic.

In her 2013 book “I Hate Everyone… Starting with Me,” she said she wanted “a huge showbiz affair with lights, camera, action”–the paragraph of which was reproduced on the inside of the funeral program.

“I want paparazzi and I want publicists making a scene! I want it to be Hollywood all the way,” she wrote.

Melissa, wearing a black dress and large black sunglasses, was cheered by Rivers’ fans as she pulled away in a black limo after the service.

One police officer estimated the crowd, many of them women, at around 1,500.

The bagpipe players were given a roar of applause as they streamed out of the synagogue, closing off a portion of 5th Avenue as the mourners departed.

In the crowd there were complaints that a huge screen was not erected outside to broadcast the funeral. “They way she was, she would have wanted it,” muttered one woman.

Rabbi Joshua Davidson led opening prayers. He previously announced: “We mourn with her family, friends and all those millions to whom she brought laughter and joy.”

No specific cause of Rivers’ death has been made public and New York State Health Department said it was investigating the circumstances that surrounded her reported cardiac arrest at Yorkville Endoscopy Center.

The daughter of a well-off Jewish family, Rivers enjoyed a stunningly successful career that lasted decades and worked right up until falling ill last week.

Born Joan Alexandra Molinsky in Brooklyn, she graduated from New York’s Barnard College and worked in the fashion industry before starting out in stand-up under the stage name Joan Rivers.

She spared no one her razor-sharp wit and was considered one of the best at delivering a cutting one-liner.

She took aim at celebrities and public figures, joking about modern America’s obsession with image and neuroses.

In later years, Rivers became as well-known for her love of plastic surgery and reinvented herself as the host of “Fashion Police,” a show that offered running critiques of the red-carpet attire worn by the glitterati at A-list events.–Jennie Matthew