Joan will be missed: ‘She wasn’t done’ | Inquirer Entertainment

Joan will be missed: ‘She wasn’t done’ 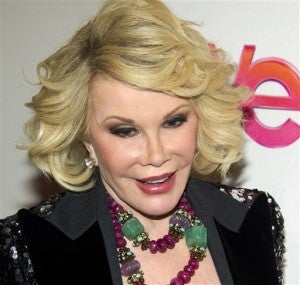 Fellow “Fashion Police” panelist Kelly Osbourne in a statement: “I’m completely heartbroken by the loss of my beloved Joan. Not only was she my boss, she was and will always be my teacher, therapist, closest friend, inspiration and the only grandmother I ever knew. Laughter will be difficult for a while but when I’m sad, lonely or upset, all I will have to do is think of Joan and a smile will cross my face… I will miss you deeply and will always hear your voice in my head saying, ‘My darling, get out there and be you!’”

Comedian Sarah Silverman in a tweet:  “My heart is torn in half. She wasn’t done.”

Barbra Streisand in a statement: “I first met Joan Molinsky, that was her real  name, when I was 17… we were both in an off-off-Broadway show called ‘Driftwood.’  She was a real character then and now. I am so upset by her passing.  She was too young and had too much to do still.”

Israel Prime Minister Benjamin Netanyahu in a statement: “She was proud of her Jewish heritage. She was a vocal supporter of the State of Israel. We will miss her deeply and we send heartfelt condolences to her family.”

Comedian-actor-writer Louis C.K. in a statement: “I never saw someone attack a stage with so much energy. She was a controlled lightning bolt. She was a prolific and unpredictable, joyful joke writer.  She loved comedy. She loved the audience. She was a great actress and should have done that more. She loved living and working. She was kind. She was real. She was brave. She was funny and you just wanted to be around her. I looked up to her, learned from her. I loved her. I liked her. I already miss her very much.”

Comedian-actress-writer Amy Poehler in a statement: “What a full life! Every woman in comedy is indebted to her. She was there at the beginning and funny to the end. RIP, Joan.”

Host David Letterman from the taping of Thursday’s “Late Show”: “Here’s a woman, a real pioneer for other women looking for careers in stand-up comedy. And talk about guts—she would come out here and sit in this chair and say some things that were unbelievable… where you would have to swallow pretty hard. The force of her comedy was overpowering.”

Comedian Don Rickles in a statement: “Our dear Joan is gone. Knowing her, working with her and enjoying the fun times of life with her was special. She will always be in our hearts… Joan, we will miss you.”

Comedian Kathy Griffin in a tweet: “A legend, a friend, a mentor, an icon and wildly funny. One of a kind. RIP.”

Newswoman Barbara Walters in a statement.  “No one loved life, laughter and a good time more than Joan. We would have dinner and laugh and gossip and I always left the table smiling. She was a brassy, often outrageous, and hilarious performer who made millions laugh. In private, she was the picture of elegance and class. I will miss her.”

Talk show host Kelly Ripa in a statement: “Joan Rivers was a pioneer in the entertainment industry. Fearless, tireless and brilliantly funny. I will forever look up to Joan. She was a true friend.”

Comedian-host Ellen DeGeneres in a tweet: “Joan… paved the way for a lot of comedians. I’m very sad she’s gone.”

Comedian Roseanne Barr in a tweet:  “RIP, GODDESS: A GENIUS has vacated this realm.”

Talk show host Jimmy Kimmel in a tweet: “We lost a great one… she was funny all the way to the end.”

Actress-director-writer Lena Dunham in a tweet:  “Watching Joan Rivers do stand-up at age 81 was incredible: athletic, jaw-dropping, terrifying, essential. It never stopped. Neither will she.”

Auto racing star Danica Patrick in a tweet:  “I was lucky enough to have Joan Rivers critique my style! I will miss seeing and, most importantly, hearing her humor on TV!”

Musician Boy George in a tweet:   “Goodbye, my friend Joan Rivers. You were a huge part of my professional life and you brightened up the horizon with your chutzpah! Sad!”