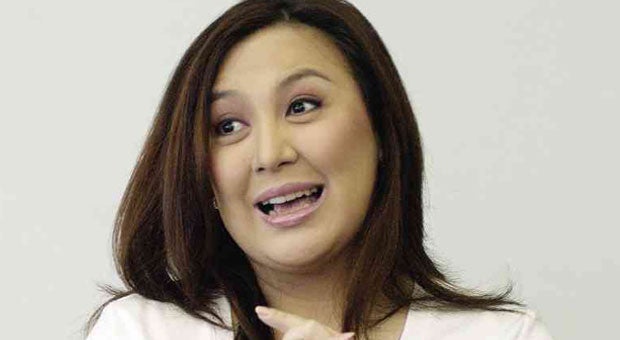 SHARON Cuneta is “grateful for, and humbled by, all the loving words of encouragement.” PDI FILE PHOTO

In her open letter to fans, posted on Facebook last week, singer-actress Sharon Cuneta vowed, “I am going back to basics.”

What she meant became clear only when she announced on Twitter and Facebook on Friday night that she was “no longer with TV5.”

(She left ABS-CBN, her home studio for 23 years, to join TV5 three years ago.)

That same night, Cuneta’s manager (and Viva Entertainment head) Vic del Rosario told the Inquirer that “Mega” (as Cuneta is known in the biz) was now a freelancer.

Comanager Sandra Chaves likewise told the Inquirer: “Projects are in the works. She will make announcements as they are confirmed.”

In her Twitter and Facebook posts, what Cuneta said was that she’d be be working on “things…which could start sooner than you think.”

Cyberspace was deluged with comments from fans and foes alike. When Inquirer Entertainment broke the story on Friday night on Twitter and INQUIRER.net, both sites received all sorts of responses—from the encouraging (“Good for her!”) to the inane (“Is she moving to the government station (Ch. 4)?”)

On her fanpage, Mega’s announcement received more than 2,100 “likes” overnight and 354 comments.

Saturday morning, she posted this message on Facebook: “Good morning, everyone! It’s a beautiful day! I have not seen a day as beautiful as today in a few years and I [couldn’t] be happier…Thank you for your loving words of encouragement…I wish you all a beautiful day just like mine.”

A bit of confusion

Prior to her Friday announcement, Mega set the record straight with the Inquirer  and clarified several issues that arose from her open letter.

No, Hollywood actor Robin Williams’ recent passing (from apparent suicide) didn’t cross her mind. Neither was she on the verge of a nervous breakdown.

Her confession caused a bit of confusion.

Best to take it straight from Mega: “Yes, I’ve been sad but no, I haven’t gone crazy, or entertained any thoughts of harming myself.”

She told the Inquirer: “I think some people misunderstood. If you reread my post, what I said was that I had a midlife crisis when I hit 40 (eight years ago), and that it lasted for a couple of years. I am long over that.”

A few days after the Facebook missive, Mega insisted, “I am feeling better.” She said she was just glad that she got to vent.

“I had typed that [open lettter] from out of the blue, with tears streaming down my face. I felt that was my weakest point,” she recounted. “It was [addressed] solely [to] my most loyal fans and supporters who have been patiently waiting for so long for me to deliver something to them. I felt so bad that I had let them, and myself, down.”

She described her letter as a “pure apology from the depths of my heart. I hadn’t been moved enough to humble myself that much in all these years.”

She reiterated that the main cause of her outburst was her weight. “Plus, a few other problems, concerns and obligations that I’ve had to deal with these past few months.”

She felt besieged, Mega explained. “Everything seemed to be coming at me all at once, and at full speed. I had never experienced anything like it.”

For those troubles, she wanted to take full responsibility.

“Even with my loving husband (Francis Pangilinan) by my side, it is only I, with the help of God, who can solve my problems, as it was only I who had caused them,” she said.

What she found most stunning was that a lot of ink and airtime was devoted to her Facebook apology.

“It came as a bit of a shock to me that lots of people, even the networks, thought to pick it up,” she admitted. “I had no idea there was going to be this outpouring, this avalanche of love and support.”

Friends she hadn’t seen in years “came out of the woodwork,” she said.

“It’s all good. I felt I had to take responsibility for my actions, and say what I really wanted to say to those I wanted to say it to.”

For all that had happened since, she said, she was “truly humbled and grateful.”