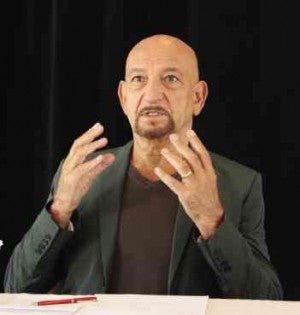 LOS ANGELES—It’s taking years before cameras finally start rolling, but Sir Ben Kingsley recently told us that he’s still set on making a dream project come true through his production company, SBK Pictures. “On our slate is (a film on) the building of the Taj Mahal by Shah Jahan, who was the Emperor of India at the time,” said the actor who won an Oscar and a Golden Globe for playing Mohandas Gandhi.

“As you know, the Taj is a monument to Shah’s wife, Mumtaz Mahal,” Ben remarked about his passion project titled “Taj” and written by David Ashton. “I have a wonderful script, and I shall play Shah Jahan. It explains how you turn a scream of grief into an everlasting and beautiful monument. He succeeded. The movie will explain how he did it and the forces that were at play in the creation of the Taj Mahal, and that loss.”

Also on Ben’s to-do list, and it may happen sooner, is a film about Jack Cornwell VC, the 16-year-old boy who was posthumously awarded Britain’s highest military honor for his bravery in the 1916 Battle of Jutland. Ben will play British commander, Admiral Sir John Jellicoe.

Ben added, “I am producing and acting in the film involving the British navy and the man in question had a terrible decision to make, as all military men and women do. The film will examine that.”

Asked to share his memories of being knighted by the Queen at the Buckingham Palace in 2002, Ben obliged. “When Her Majesty knighted me, the sword she used to raise above my head and touch my shoulders was the one that her father wore ceremonially as Commander-in-Chief of the British Forces during World War II. Her father and mother never left London during the Blitz. So, I was aware of the historical implications of that, and how much she loved her father.

“So, for the Queen to use her father’s sword in that ceremony had huge resonance. We chatted briefly about what was happening in my life. I left the Palace feeling embraced.”

Ben revealed a side story about becoming a knight. “Then, my mother refused to acknowledge my knighthood, which I found bitterly hurtful. Life is all about balance, isn’t it? That wonderful woman (Queen Elizabeth II) had said, we accept you and love what you do, but my mother refused to acknowledge that it had taken place. She was embarrassed, bitter and jealous. That’s the whole story. I have never told it before.”

Ben pointed out how different the times are from when he became a professional actor in the late ’60s. “The distractions for a young actor are a million times more diverting now than when I was a young actor.”

He  shared an anecdote. “It was not too long ago when I was working with a young actor. At the end of every scene, he went to his trailer to Google himself—honestly—and look at everything that was written about him on that day.

“When he returned to the set, he had forgotten all his dialogue—he couldn’t remember it. He was in a state of total disarray and panic. A young actor has to be  faithful to the simple mandate—tell the story! All the rest is nonsense.”

In “The Boxtrolls,” a combination of stop-motion, hand-drawn and CG artistry and technology, Ben voices villainous Archibald Snatcher. Since Ben noted, as pointed out by director Anthony Stacchi (the other director is Graham Annable) that Archibald “eats a lot, and is a gluttonous man,” the actor recorded his lines while reclining.

“Because the face of Snatcher gets so distorted and swollen, I needed to shrink my mouth, so I couldn’t do it with the muscles of my mouth,” Ben further described how he voiced his character. “I squashed my face in.”

Ben said he hasn’t been to Laika, the animated studio based in Oregon that created “The Boxtrolls” and other well-received films such as “ParaNorman” and “Coraline.” “But, I feel I have because, when we were at Comic-Con, I met part of the team that I had never met before,” Ben emphasized. “There was a wonderful footage that showed how they make and move those puppets. Every costume is hand-stitched and handmade.

“The key to the success of this film is that it’s handmade; it’s made by human beings making and moving things with their hands.”

The man has come a long way from his first brush with film and fame. “My first real impression of cinema was when I was 4 or 5 years old. It was a movie (‘Never Take No For An Answer’) that I went to see in the cinema, close to where we lived in the North of England,” Ben reminisced. “It’s the most wonderful, touching, beautiful story. Let me jump forward to ‘Hugo,’ where I worked with Martin Scorsese. I mentioned this film (‘Never…’) to him and he said, ‘I have a copy. Would you like to see it again?’ So, I watched it again—and it was thrilling!”