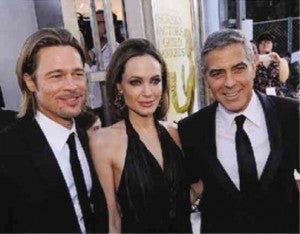 Some stars have always been known for their support of their important advocacies of choice. They throw the spotlight on important causes that would otherwise not get the viewing public’s attention, or elicit its concern and financial support.

Brad Pitt, George Clooney and Angelina Jolie are only a few of the big stars who have made a key difference for some of the United Nations’ enlightened initiatives, and the public wouldn’t be as informed about pressing issues like global warming, climate change and poverty and hunger worldwide without their essential stellar involvement.

The situation has become more dramatically intense of late, due to the shocking death by suicide of Robin Williams, due to his intense depression.

Known for his slap-happy ebullience and even comic frenzy, it now turns out that Williams felt hopelessly sad beyond relief, partly due to his having discovered that he was in the early stages of the debilitating Parkinson’s Disease, the same illness that had previously compromised the then high-flying stellar career of Michael J. Fox.

In fact, Williams had helped Fox raise money to look for a cure for his ailment—ironically not realizing that he would be first to go, due to his psychological inability to cope with it.

This is all very sad and tragic, but the good news is that Fox has helped raise so much money for the fight against Parkinson’s in the past decade that he and other patients are starting to benefit from recent medical discoveries and developments.

Fox has even gone back to doing a new TV sitcom, and it’s just too bad that Williams was so psychologically down on his prospects that he couldn’t hold on, as Fox has more optimistically and courageously done.

In any case, the huge media coverage of Williams’ tragic demise has had the much more positive effect of shining the public spotlight, not just on Parkinson’s, but on the scourge of depression itself, which affects millions of people worldwide.

It used to be “shamefully” swept under the carpet, but the discussion has now been brought out into the open, and the hope is that many potential victims will be saved, as a result.

Most recently the big advocacy that has excited the global audience is the effort to raise awareness and funds for research to find a cure for ALS, the debilitating nerve condition also known as Lou Gehrig’s Disease.

In the past, fundraising efforts would generate only a few thousand dollars’ worth of support, but celebrity advocates’ inspired use of the so-called “Ice-Bucket Challenge” has proven to be so compellingly eyecatching and persuasive that the amount raised this year is—in the mega-millions!

The challenge requires celebrities to get themselves doused with ice-cold water, and to “nominate” other  stars to take the challenge, make a hefty donation—or both!

To date, many luminaries, from former president George Bush to Bill Gates and Oprah Winfrey, have gone all-out for the very good cause, and local luminaries like Vice Ganda have also jumped onto the trendy “ice-cold” advocacy bandwagon!