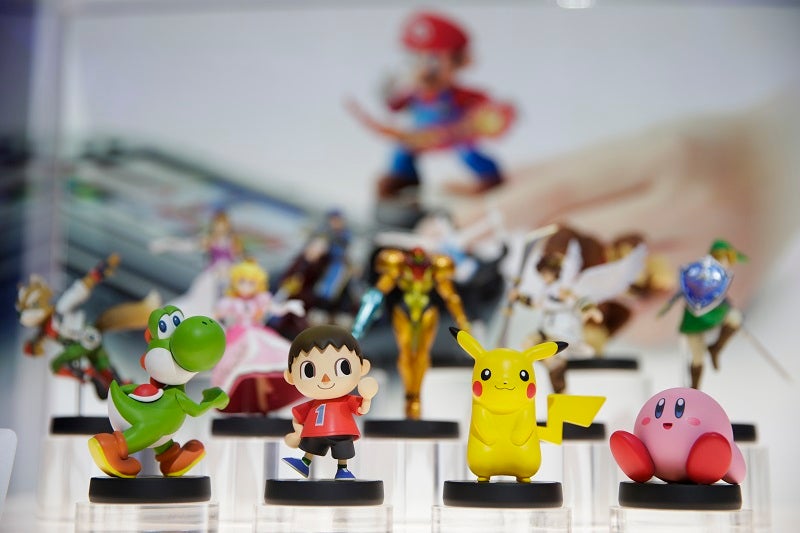 In this June 10, 2014 file photo, amiibo characters for Wii U are on display at the Nintendo booth during the Electronic Entertainment Expo, in Los Angeles. Pikachu and Link will be among the first characters coming to “amiibo.” Nintendo announced the 12 characters on Friday, Aug. 29, 2014, that will be part of its upcoming toys-meet-game franchise set for release later this year. AP

LOS ANGELES — Pikachu and Link will be among the first characters coming to “amiibo.”

Nintendo announced Friday that 12 characters will initially be part of its upcoming toy-game franchise set for release later this year. In addition to the “Pokemon” and “Legend of Zelda” leading men, the starting line-up will include Mario, Princess Peach, Yoshi, Donkey Kong, Samus Aran, Kirby, Fox McCloud, Marth, the “Wii Fit” Trainer and the Villager from “Animal Crossing.”

The figures in the “amiibo” toy-game line will each cost $12.99 and work in tandem with several of the Japanese gaming giant’s upcoming titles, beginning with “Super Smash Bros.”

“We wanted to make sure that the breadth of characters we had for the initial ‘amiibo’ line-up supported the fan favorites, as well as showcase the variety of people Nintendo speaks to — from kids to adults,” Nintendo of America President Reggie Fils-Aime said in an interview. “For example, you’ve got a character like Marth from the ‘Fire Emblem’ series. We thought exposing Marth to a wider collection of consumers through ‘amiibo’ made a ton of sense, but, of course, we had to have Mario, Princess Peach and Donkey Kong in that initial line-up, as well.”

Similar to Activision’s “Skylanders” and “Disney Infinity,” the characters’ virtual histories will be stored on the plastic figures and transmitted through the Wii U GamePad, the controller for the Wii U console that features a touchscreen and near field communication (NFC) capabilities. Unlike the Activision Blizzard Inc. and Walt Disney Co. franchises, the “amiibo” figures will work with several games from different genres and won’t be required to play the games.

“Our vision is to have these ‘amiibo’ figures be your playable friends that allow you to enhance the overall experience,” said Fils-Aime. “It’s a different approach from Activision and Disney, which is more to unlock something in the game. You’re going to want to have your ‘amiibo’ figure because it’s going to allow you to enhance your skills, upgrade your character and take the experience over to a friend’s house.”

Nintendo first unveiled “amiibo” at the Electronic Entertainment Expo in June. The company plans to release more figures over the next year and include “amiibo” functionality in future games, as well as compatibility with its handheld Nintendo 3DS system.

The Kyoto, Japan-based company is hoping the figurines will help boost its bottom line and sales of its beleaguered Wii U console, which has been on the rise since the May release of “Mario Kart 8.” Despite the success of the latest installment in the cartoony Nintendo racing series, Wii U sales still trail behind the PlayStation 4 and Xbox One consoles from rivals Sony Corp. and Microsoft Corp.

“Call of Duty” and “Assassin’s Creed” publishers Activision and Ubisoft Entertainment recently said they wouldn’t bring the new installments of those popular series to the Wii U later this year.

“In the end, I want the very best of every single publisher’s content on our platform,” said Fils-Aime. “We believe we’ll get there as we grow the install base of the system. Make no mistake: The consumer knows they can get high-quality games on the Wii U console. That’s why our business is up almost double over last year.”

Nintendo will be showing off upcoming games like “Super Smash Bros.,” ”Hyrule Warriors” and “Captain Toad: Treasure Tracker” at PAX Prime, a four-day celebration of gaming that kicks off Friday in Seattle.