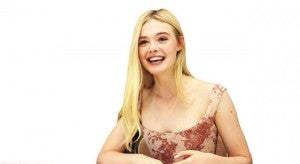 LOS ANGELES—“There isn’t, and I hope there never will be [competition between us],” Elle Fanning replied during our recent chat when asked if there was a bit of a friendly contest, career-wise, between her and older sister Dakota.

Elle, blossoming into a lovely young woman, is enjoying a busy career with several films this year and many more projects lined up.

On this recent Saturday morning, Elle wore a dress that complemented her fair skin and long blond hair. “People ask that all the time. We never even discuss films with each other. We decide [separately] on which films we want to do. We never read each other’s scripts. That’s off-limits.”

Elle followed in her precocious sister’s footsteps. She recounted how it began, when the Fanning family still lived in Georgia. “My sister put on these shows around the house,” Elle shared. “My mom (Heather) noticed and was like, ‘Maybe she should be in a play.’ My sister was really young at the time. My mom put her in this little play camp in Georgia and she got the main part. She was about 5.”

Elle added, laughing, “People said, ‘You should move to LA or New York.’ So my mom and sister did. They lived on my aunt’s couch (in LA). Then my sister got 10 commercials in a week—something crazy like that.”

When Dakota landed a plum role opposite Sean Penn and Michelle Pfeiffer in “I Am Sam,” the Fannings decided to move permanently to LA. Elle and dad Steven joined Dakota and Heather. “I was probably 2,” Elle said. “We have lived here since.”

Elle started even younger than Dakota, who is now 20. She was only 3 when she played a younger version of Dakota’s character in “I Am Sam.” She did the same in the sci-fi miniseries, “Taken.” Pretty soon, Elle was carving her own career. She is now one of Hollywood’s busiest young actresses.

Among her next films are “Trumbo,” with Bryan Cranston and Diane Lane, “How to Talk to Girls at Parties,” “A Storm in the Stars” and “All the Bright Places.”

The sisters may not have professional rivalry but Elle, 16, laughingly volunteered an old issue between them. “I used to always go into her closet and steal things, trying to be super sneaky, but she always found out,” Elle said. “One time, I got her hat, shoes and dress and went out in New York. She phoned and was like, ‘You are in all of my clothes. I saw you on the Internet dressed in my entire outfit!’ I was like, ‘Oh, my God, I’m in trouble.’

“So I don’t really know if I can still do that. Now, she comes and sometimes takes my clothes. But she always asks first. We [feel a little better] about it now.”

Asked what she can’t live without, Elle replied, “[I could say] family and friends, but also something silly, like the calendar in my room. I have, like, OCD about it; it’s a Barbie calendar. I 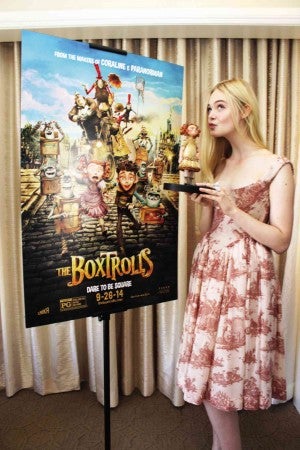 TEEN actress with a model of her character and a poster of the new animated film on the day of this interview.

Elle’s last movie, “Maleficent” with Angelina Jolie, was a huge hit. The young star hopes that Angelina will continue to be a guiding presence in her life. “After the press tour, we exchanged e-mails,” she said. “I really look up to her and I hope we stay in touch. It was amazing doing ‘Maleficent’ and then reuniting on the press tour. Hopefully, I will see her again.”

In the animated “The Boxtrolls,” a stop-motion, hand-drawn and CG hybrid, Elle voices Winnie, feisty daughter of Lord Portley-Rind. The movie, based on Alan Snow’s fantasy book “Here Be Monsters,” is from the team and animation studio (Laika, based in Oregon) behind the acclaimed “Coraline” and “ParaNorman.” Anthony Stacchi and Graham Annable direct the Victorian-era set tale about the Boxtrolls, a community of fantastical creatures living under a town’s cobblestone streets.

The creatures have raised a human boy, Eggs (Isaac Hempstead Wright of “Game of Thrones”), who meets another human, Winnie. Eggs and Winnie team up to save the Boxtrolls from the villainous Archibald Snatcher (Ben Kingsley).

“I relate to her in that we are both go-getters,” Elle said of her sassy character. “We try to overcome our fears. She is definitely a lot more dramatic than I am (laughs). She’s completely over-dramatic, a little spoiled.”

She added: “I think at first the audience will not like Winnie because she’s a little bratty. But as the movie goes on, she shows her sensitive side and you realize that she’s just trying to get her dad’s attention and help Eggs realize that he’s a boy, not a Boxtroll. You learn to love her and respect her sassy side because at times it’s really funny.”

Elle reveled in playing a comedic character for the first time. “I had fun… exaggerating more than [usual] because it’s all through your voice.”

The actress admitted she was nervous the first time she went into the studio, though she had voiced for another animated film before, when she was very young. “My sister and I did ‘My Neighbor Totoro,’ the American version (Disney’s, 2005). So, it had been a really long time since I did any voice [acting for an animated film].”

Elle recounted her first “The Boxtrolls” session: “I remember trying to show emotion in my eyes and face. But as I realized, after that first day, it doesn’t matter how you look. I had to figure out how to get the emotion from my eyes into the way I sound. Then I got really comfortable. Eventually, I found Winnie’s voice completely.

“The next time I went in, I just switched to Winnie. It was a [liberating] experience; I could try whatever I wanted—soft, high… It was open to so many possibilities.”

Despite a booming career, Elle gets to attend regular school. “We found a good one that allows me to leave (for filming),” she said. “A teacher comes with me. I have to do the same things as my classmates. I have always kept up that way; why stop now?”

“I have two more years of high school left,” said Elle, who stressed that she enjoys being a regular student when she’s on campus. “This year, I take the SAT (exam). My mom is trying to schedule a college tour for me. My sister goes to NYU (New York University). That is good for her. I have to find my place.”

Read Next
Agents of Ambush, August 29, 2014
EDITORS' PICK
Unleash the photographer in you this World Photography Day with vivo smartphones
Look Through: The fate of impounded stray dogs
DOH says COVID-19 cases plateauing, but public shouldn’t be ‘complacent’
What to watch out for when selecting a video surveillance solution
23,000 cops to be deployed nationwide for school reopening
House energy committee chair Arroyo bats for cheap electricity
MOST READ
Sharon Cuneta asks for prayers for friend in ICU who suffered silent stroke
Light therapy could be the answer to your sleep problems
Korina Sanchez reunites with former ABS-CBN co-anchors Julius Babao, Cheryl Cosim
PBA: San Miguel ousts Meralco to arrange finals duel vs TNT
Don't miss out on the latest news and information.