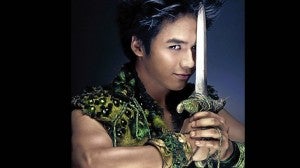 Singer-actor Sam Concepcion, who is celebrating his 10th year in show biz this month, admitted that he still has a lot to learn about how friendships and romantic relationships are formed in the business.

“Contrary to what other people say about how friendships can be very fleeting in show biz, I’ve learned that there are real people – those I can actually trust,” he told Inquirer Entertainment during a media gathering held at Jollibee The Fort on Sunday. “You don’t have to be distant. You can actually have a good relationship with the people you work with.”

But when it comes to romantic relationships, Sam, 19, said he really can’t say much, although he’s been romantically linked to two girls – actresses Cheska Ortega and Coleen Garcia. “I just want to find someone who is really understanding about the work that I do.”

He stressed that, “technically, I’ve never really had a girlfriend. The thing with Cheska was so long ago. I was only 13 then. I don’t put labels on my relationships. We’re still good friends today.”

“I’m considering the possibility [of posing in glossy magazines]. My managers are expecting me to do it next year. I have to first take care of my body, make sure I’m toned and fit,” said Sam, who has been working out to develop his biceps and abdominal muscles for his role as Peter Pan in the coming musical coproduced by Repertory Philippines and Stages.

When he was 9 years old, Sam had already acted in various stage plays. But it was his victory in the ABS-CBN talent search “Little Big Star” in 2005 that paved the way for him to make a name on mainstream TV. He landed his first major role in the fantasy-adventure show “Super Inggo” in 2006. Shortly after, he joined the Sunday variety show “ASAP.”
Youth role model

In 2007, he launched his first album with Universal Records, and was appointed Youth Role Model and Spokesperson of the Department of Education. In 2008, DreamWorks tapped him to sing the theme of the animated movie “Kung Fu Panda” titled “Kung Fu Fighting.” Last year, he was the front act for Miley Cyrus and Taylor Swift’s Manila concerts.

With “Peter Pan,” Sam said he has come full circle, after having appeared in his first musical, “The Lion, The Witch and The Wardrobe,” in 2001. He was also in the cast of the local production of “The High School Musical” and “N.O.A.H.”

“I never thought I’d get to where I am now,” he said. “Stage acting is just one part of me. There will be more albums, more TV projects. I want to be able to try everything.”

According to a statement from Stages, it is the first time that this version of “Peter Pan,” written by Stiles and Drewe and the late Willis Hall, will be staged in Asia. It relieves Sir James Barrie’s timeless tale of the boy who never grew up.

“This is a dream come true. I’ve been rehearsing every day for two months,” said Sam, whose flight instructor came all the way from Las Vegas. “It’s fun. There are quite a few scenes that require flying. The other day, I wore the harness from 10 a.m. to 10 p.m. I have to get used to it.”

“Peter Pan” goes onstage from September 30 to October 30 at the Meralco Theater.