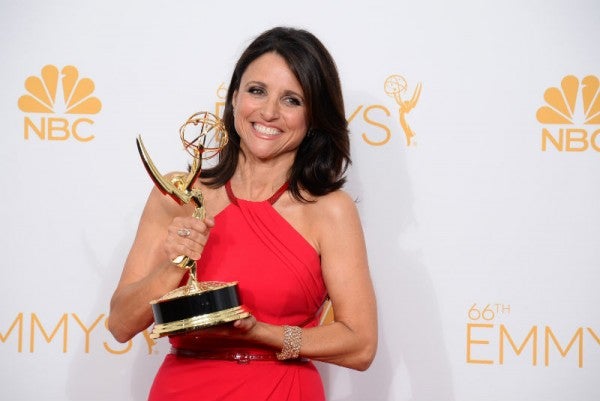 Julia Louis-Dreyfus poses in the press room with the award for outstanding lead actress in a comedy series for her work on “Veep” at the 66th Annual Primetime Emmy Awards at the Nokia Theatre L.A. Live on Monday, Aug. 25, 2014, in Los Angeles. Photo by Jordan Strauss/Invision/AP

LOS ANGELES — TV comedy stars Julia Louis-Dreyfus and Jim Parsons were among early winners Monday at the annual Emmys, television’s version of the Oscars, where the late Robin Williams was to be honored.

Louis C.K. and Ty Burrell also took prizes in the first half of the awards fest, where hit royal feud saga “Game of Thrones” and “Breaking Bad” were among the most tipped for honors.

The show was preceded by a two-hour red carpet parade, at which television’s top stars strutted their stuff, before sitting down to await their awards evening fate.

Among the biggest laughs came from funnyman Jimmy Kimmel, who joked that Oscar-winning actor Matthew McConaughey — nominated for bleak cop drama “True Detective” — was too handsome for television.

“Beautiful son of a bitch. That’s not a television face, that’s a movie star face,” Kimmel joked, adding: “You don’t belong here. And take Julia Roberts with you while you’re at it,” said the late-night talk show host.

And there were more giggles — and cheers — when “Breaking Bad” star Bryan Cranston planted a prolonged kiss on the lips of Louis-Dreyfus as she went up to collect her prize.

While “Thrones” had the most nominations, all was to play for, with acclaimed shows including “True Detective” and “Orange Is the New Black” also tipped for success.

“Thrones,” based on George R.R. Martin’s best-selling novels about power struggles between dueling clans in seven mythical kingdoms, won most nominations overall with 19 including in the prestigious best drama series.

The show — already renewed for a fifth and sixth season — is among Home Box Office’s nominated shows. Overall, HBO heads into the glittering ceremony with a winning 99 nods, compared to 31 for online streaming giant Netflix.

“Fargo,” an offshoot of the quirky 1996 Coen brothers’ movie, headed into the ceremony with nominations in an impressive 18 categories, with Billy Bob Thornton a contestant for lead actor in a miniseries.

Cult crime series “Breaking Bad” — which won best drama last year — was again among the top contenders for the coveted title, although dismayed fans saw it end almost a year ago after five highly acclaimed seasons.

Cranston, who played cancer-stricken teacher-turned-drugs kingpin Walter White in the blockbuster series, is nominated for best drama actor, while the series is also up for best supporting drama actress and actor.

Another hot commodity is HBO crime drama “True Detective,” which scored competing lead actor nominations for its co-stars Woody Harrelson and McConaughey, a police duo who hunt for a serial killer in Louisiana.

It is in the running for best drama series as well.

But the ceremony was overshadowed by the August 11 death, at age 63, of Hollywood great Robin Williams, which rocked the entertainment world.

With emotions still raw, his friend and fellow actor-comedian Billy Crystal will pay tribute to the Oscar winner during the “in memoriam” part of the primetime program.

When nominations were announced in July there were some notable snubs, including CBS’s widely acclaimed “The Good Wife” in the best drama race, as well as for “Homeland” star Damian Lewis and Elisabeth Moss of “Mad Men.”

Bruce Rosenblum, chairman of the Television Academy, which nominates and votes on the awards, said its members were faced with an embarrassment of riches.

“We’re in a golden age of television,” he said. “When you look at the dramas that were nominated, I’m not sure which one of those you would move out” to accommodate others, Rosenblum said.