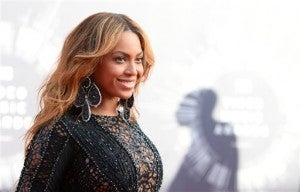 Beyonce arrives at the MTV Video Music Awards at The Forum on Sunday, Aug. 24, 2014, in Inglewood, California. AP

Beyonce closed the MTV Video Music Award with an epic nearly 20-minute performance and was joined onstage by her husband and daughter which brought her to tears.

Beyonce sang and danced in a metallic leotard — while Blue Ivy and Jay Z watched from their seats — as the diva declared: “MTV, welcome to my world.”

The family was onstage together as Beyonce accepted the Michael Jackson Video Vanguard award. Jay Z called her the “greatest living entertainer.”

A teary-eyed Beyonce thanked her fans and looked at her daughter and husband, telling them she loved them.

Miley Cyrus won video of the year. Unlike last year’s VMAs, when Cyrus twerked and danced shockingly onstage, she took a back seat Sunday night by sending her guest, who said he was homeless, onstage.