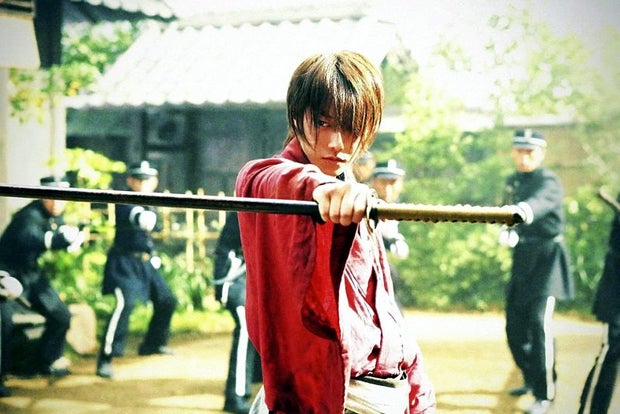 The film is a sequel to “Rurouni Kenshin,” and both films are based on the Nobuhiro Watsuki manga of the same name. The latest film, the first of a two-part story, surpasses the original in both action and scale.

A much-feared assassin from the final years of the Tokugawa shogunate, Kenshin (played by Takeru Sato) becomes a wanderer after the Meiji Restoration in 1868 and helps ordinary people using a blunt-edged sword. However, Shishio (Tatsuya Fujiwara), who took over Kenshin’s job as an assassin, holds a grudge against the new government that betrayed him and gathers private soldiers to carry out a coup. To stop Shishio, Kenshin sets off for Kyoto.

The film’s main crew, including director Keishi Otomo, returns from the previous film. The cast from the original is joined by some new faces, including Fujiwara and Yusuke Iseya, complementing and completing a fantastic lineup.

Action director Kenji Tanigaki has worked extensively in Hong Kong, and “The Great Fire” benefits from his Hong Kong-style techniques even more than the previous film. Particularly outstanding is the groundbreaking fight scene inside a house involving an old man (Min Tanaka) who battles with tonfa, stick-like weapons used in ancient martial arts, and a man using two swords (Iseya).

Past Japanese period films, such as “Zatoichi,” provided inspiration for wuxia martial arts films, the sword-fighting dramas of the Chinese-speaking world. The action of wuxia evolved from there, while Japanese period films actually regressed somewhat, spreading the gap between the styles wider and wider.

This film incorporates the progress made by wuxia films and strives to surpass them, which is a moving story in itself.

The film, in Japanese, is showing at Shinjuku Piccadilly and other cinemas.