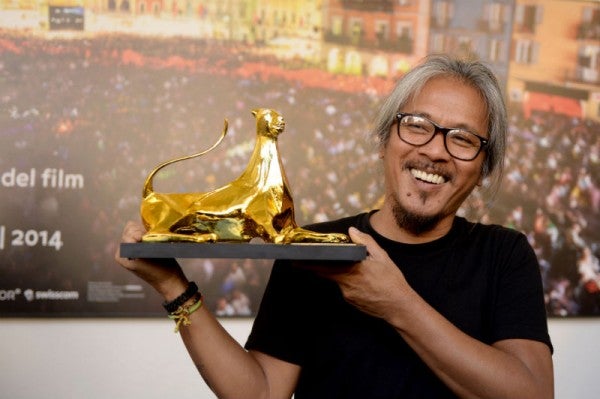 Filipino film director Lav Diaz from the film “From what is before” poses with the Pardo d’oro (Golden Leopard) award during the photocall at the 67th Locarno International Film Festival in Locarno, Switzerland, Saturday, Aug. 16, 2014. AP

MANILA, Philippines–The Philippine director of an international award-winning movie returned home Monday to presidential accolades and the challenge of finding an audience for his five-hour film.

Lav Diaz, whose movie “From What Is Before” scooped the coveted Golden Leopard prize at the prestigious Locarno film festival in Switzerland at the weekend, said his victory was a boost for Philippine cinema.

“It’s good for the Filipino people. It’s good for Filipino cinema. Our work is on par with other cinemas of the world,” he told AFP hours after returning.

Diaz, 55, whose black-and-white film recounts the strange events that befall an isolated village in the Philippines in 1972 during the era of dictator Ferdinand Marcos, won the festival’s top prize while his lead actress Hazel Orencio won best actress.

Diaz said in the coming days he would be looking for venues to show the movie in its entirety and to distribute it both locally and abroad.

“That is the struggle of (non-commercial) cinema,” he said, remarking that Hollywood had conditioned people to expect that movies should only be about two hours long.

But he said this was a misconception, adding that at Locarno, his movie was screened to a full-house thrice with the audience staying to the end.

“They didn’t want the film to end,” he laughed.

President Aquino’s spokesman Herminio Coloma congratulated Diaz and Orenico, saying “once again, we have shown to the world that the Filipinos are undeniably talented.”

TAGS: Entertainment, Festival, Film, From What Is Before, Lav Diaz, Locarno, Philippines, Switzerland