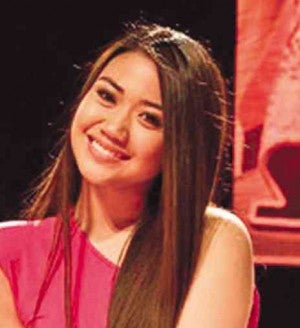 AMON. Deserves her shot at stardom.

MERCY FUTALAN, televiewer: “‘The Voice of the Philippines’” Morissette Amon stands out because she is Sarah Geronimo’s dead- ringer—they could pass for sisters! They have powerful voices, but I think Morissette is more expressive and has deeper understanding of the message of her songs. But, she has to control her distracting hand movements and gimmicky handling of the microphone. She’s more endearing when she isn’t as busy onstage, especially when she sings ballads.”

Peter Mangente, student: “The observation that television is a cruel medium manifested itself while I was watching a newscast recently, involving a heated discussion between the truckers’ representative and a politician about the truck ban.

“It would have been a fruitful viewing experience had it not been for the local executive, who consistently mispronounced his Fs for Ps and Bs for Vs—I couldn’t contain my laughter!  A speech lesson is in order—or, he should just have spoken in Filipino.”

Leonor Patrimonio, retired teacher: “On my wish list: Earlier time slots for TV documentaries and Jessica Soho’s ‘State of the Nation.’ If this isn’t possible, how about airing replays during the day?”

Cecile Patron, nurse: “The television coverage of the PhilPop finals was such an underwhelming event. The production values were no match to, say, ‘The Voice Kids’ finale. Thank heavens for the cast of ‘Rak of Aegis,’ whose production number was a show-stopper, especially with Aicelle Santos singing the solo parts!”

Chloe Calderon, student: “I’m smitten by the exceptional talent of ‘The Voice Kids’ runner-up, Darren Espanto. I hope ABS-CBN gives him a recording contract, like Lyca Gairanod. He can also be groomed as an actor. Please do it fast—before Darren decides to go back to Canada!”

TAGS: “The Voice of the Philippines”, Morissette Amon