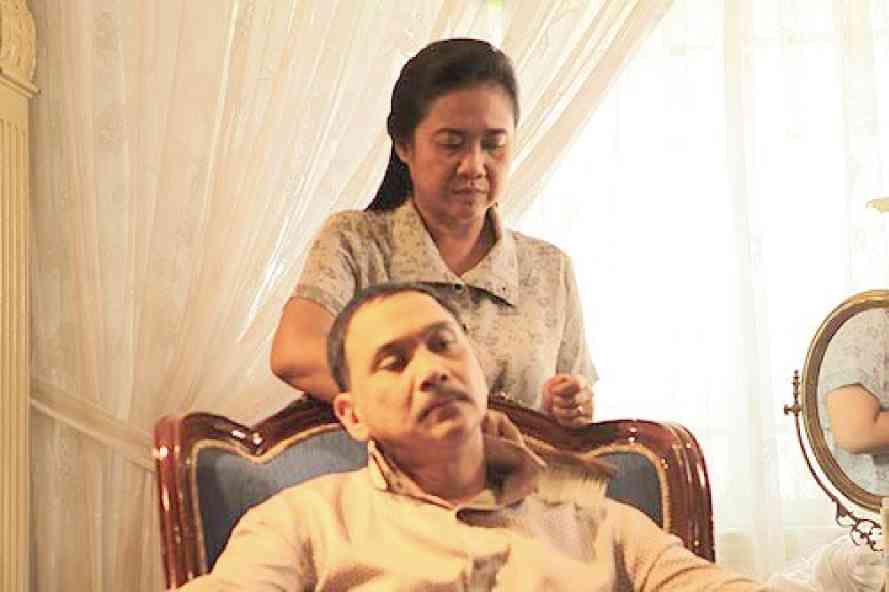 IN “Mga Kuwentong Barbero” (Barber’s Tales), Eugene Domingo’s boundless dramatic gifts continue to unravel as she delivers a master class in thespic restraint and subtlety in her prized portrayal of subservient housewife, Marilou Aguallo, who takes over the barbershop left by her verbally abusive husband, Jose (Daniel Fernando), when he suddenly dies in his sleep.

Set in 1975 as the horrors of a political despot’s military reign creepingly descend on a barrio, the latest film of Jun Lana (“Bwakaw”) will leave you with a heavy but hopeful heart. But, the movie is more than just about a woman who rises above the stultifying limitations of her gender set by a misogynistic culture.

It also movingly examines political corruption without “preachifying,” and raises pertinent questions about the role of women in society—even when some of its contrived crowd scenes (the only  disingenuous element about the movie) threaten to dilute its narrative power.

What makes the gorgeously photographed film even more viewable are the strained and fractured relationships of its well-limned characters: Marilou is torn between her newfound friendship with battered mayor’s wife, Cecilia (Iza Calzado), and the greasily duplicitous politician, Mayor Alfredo Bartolome (the pitch-perfect Noni Buencamino), she serves.

Her bosom buddies have their own crosses to bear: The perpetually pregnant Susan (Gladys Reyes) complains about her husband’s voracious appetite for sex, while Tessie (Shamaine Buencamino) is worried about the suspicious activities of her “adoptive” nephew (and Marilou’s godson), Edmond (Nicco Manalo)—a student who has gone underground, and is on the run from military operatives! Her other avid client, Fr. Arturo (Eddie Garcia), has just been accused of supporting the communist movement.

That’s a lot of intersecting tales to string together—but, Lana cogently brings them together as a cohesive piece, one insightful section after another. He turns the story’s doom and gloom scenario into tension-filled sequences that bristle with earnest emotions and stirring scenes of thrilling action and harrowing violence—especially when military men pay Marilou’s barbershop a visit while the wounded Edmond is hiding inside her adjoining hut!

The film benefits from Lana’s resilient skill at piecing together the deceptively complex patterns of his ornate tales, boosted further by an outstanding cast—most notably, Calzado, Reyes, the Buencamino couple and Sue Prado (as a manipulative hooker)—that vigorously  keeps up with the production’s thematic and dramatic ambitions. (Also, watch out for Nora Aunor’s stellar cameo appearance—as a tough-talking guerrilla leader.)

Domingo is a thespic knockout from beginning to end—you won’t miss the knowing twinkle in her eyes we often see in her crowd-pleasing “dramedic” potboilers, even in the production’s random moments of angst-leavening humor.

Her character’s situations may be dire, but she manages to keep her scenes from becoming overwhelmingly treacly. Eugene is smart enough to know that gut-wrenching ululations of grief don’t necessarily result in a textured characterization.

Without a doubt, hers is one of the year’s finest performances. If you complain about getting inundated with unsatisfying films at the cineplexes and mainstream rom-coms that dumb down their audience, watching this movie will change that. Go.