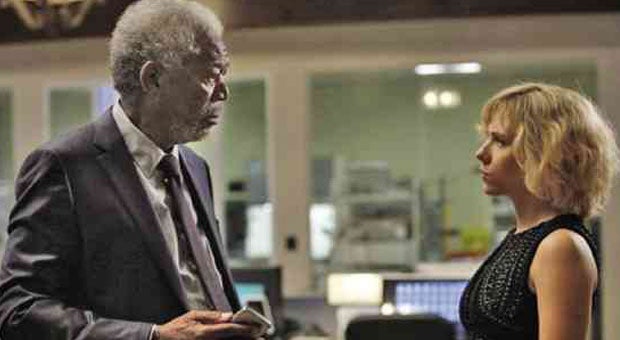 MORGAN Freeman provides the voice of knowledge, while Scarlett Johansson gets to be a dark avenger… again.

In Luc Besson’s briskly-paced sci-fi-action flick “Lucy,” the carefree titular girl played by Scarlett Johansson gets access to her brain’s hidden capabilities. She uses her newly acquired mind powers in ways that are fantastic and, at times, unnerving.

“Lucy” is penned and directed by Besson, who applies his frenetic, stylish action sensibilities to the enterprise.

The movie emits danger from the get-go. A few minutes into it, party girl Lucy, studying in Taiwan, is forced to deliver a mysterious package to a hotel. She is quickly dragged by burly  henchmen and meets a Taiwanese mob lord, Mr. Jang (Choi Min-sik), who makes no secret of his ruthlessness.

In another part of the world, Professor Norman (Morgan Freeman) is conducting a lecture on brain capacity and the nature of animals. He theorizes that humans can do staggering things if they use more than the fraction of brain power normally utilized.

Lucy’s astonishing experience illustrates that, as her body absorbs the new drug she is forced to carry as a mule. Pissed but focused, she is raring for payback, among other new concerns!

It’s ambitious, and realizes its goals seamlessly, compared to a few other Besson films.

and learning—but adds little else; he’s mostly a background character that doesn’t matter.

Visually, “Lucy” is rather playful and gets image-trippy from time to time, as the filmmaker is wont to do. From flashes of abstract CGI to very specific sped-up sequences with adventurous camera angles—Besson likes visual emphasis and ditches subtlety once again.

But while it’s nearly “The Messenger”-ish in terms of flashy, funky ideas, there are still “Leon”-like touches that make the life-and-death situations more urgent.

And speaking of open minds, “Lucy” spends its time wisely pondering “unponderables”—its existential, self-aware ruminations could have gotten pretentious and contrived à la Darren Aronofsky’s “The Fountain,” but the film still minds its limitations and pulls off its more cerebral ideas with firm execution.