On Tuesday, Aug. 12, my news feeds on Facebook and Twitter were flooded with news of Robin Williams’ passing. Although I always felt great sadness upon hearing of any show biz denizen’s death, this one felt as if a really close, personal friend had died.

Like many others of my generation, I fell in love with Robin’s Mork from Ork, whose every single punch line (in the TV show “Mork & Mindy”) elicited heaps of belly laughs from my brother Gerard and myself. But beyond that, I loved Robin in “Good Morning, Vietnam,” “Dead Poets Society,” “Mrs. Doubtfire,” and “Good Will Hunting.”

As great as all those films were, his comedic talents were put to their best use in the Disney animated film “Aladdin” (1992), where he provided the voice of the Genie.

His impressions (and there were numerous), manual dexterity (one recording session had him in front of a table full of props, with which he improvised the opening scene of the movie), impeccable comic timing, and emotional honesty are hallmarks of his performance in this movie. 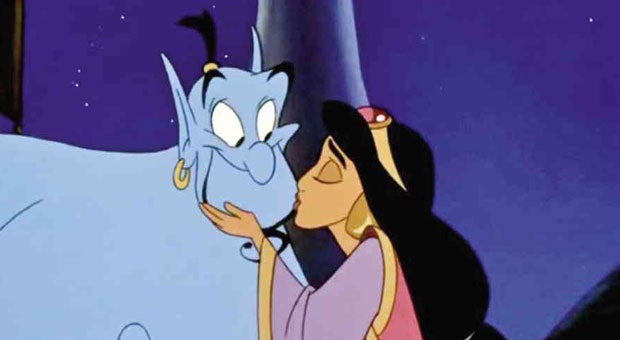 PRINCESS Jasmine gives the Genie a kiss in this scene from “Aladdin.” The privilege of saying I was in a movie with Robin Williams will forever be a highlight of my life.

I never got to meet him in person to tell him how much I loved his body of work, as his sessions on “Aladdin” had already ended by the time mine would just begin (as the singing voice of Princess Jasmine), but the privilege of saying I was in a movie with Robin Williams will forever be a highlight of my life.

To the Genie then I say, I love you for making me laugh and cry. I bid you farewell with a very heavy heart. Your wish to be free has finally come true. 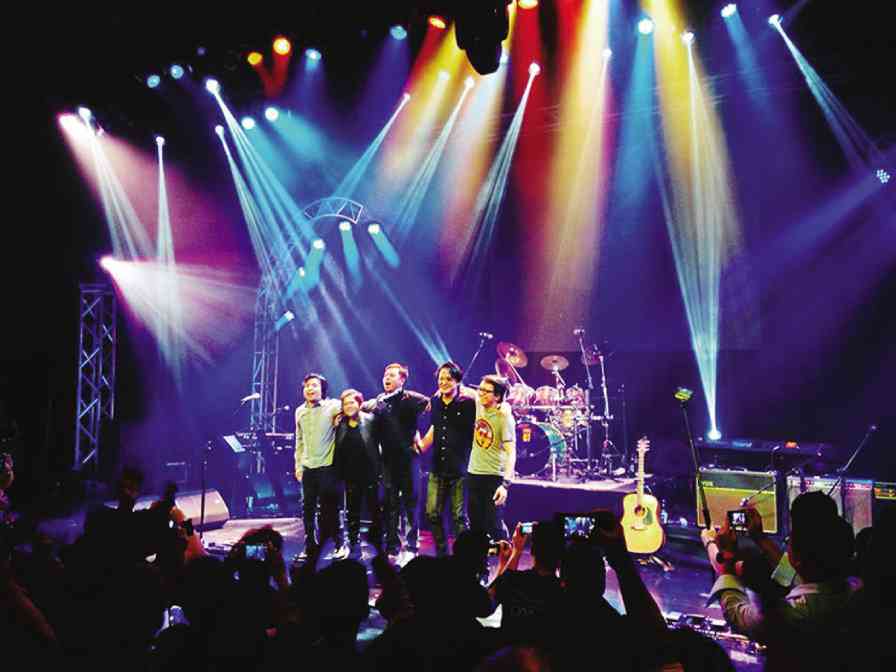 THE DAWN takes a bow after “Landmarks.” From left: Buddy, Leni, Jett, Junboy and Sancho. Photo by Evan Severino

“Honey, Sancho’s playing for The Dawn,” I told my husband Rob. We had been to quite a few of the band’s gigs over the years, but this one was far more special.

Romel “Sancho” Sanchez is Rob’s good friend (they started out as office buddies many years ago). At the “Landmarks” concert on Aug. 8, Sancho was debuting as The Dawn’s permanent guitar player. For the love of Sancho, we went.

We braved three hours of ridiculous traffic from our home in Alabang, Muntinlupa, to the Music Museum in Greenhills, San Juan. Thankfully, we arrived on time.

Once seated, we felt the excitement in the air. Many of The Dawn’s friends and family members were in attendance. The new axe man would be introduced to the world.

The lights went down and the screams began, the audience calling out each band member’s name. A little boy seated behind us kept “I love you, Tito Jett!” going at the top of his lungs for almost the whole night. “I love you, Buddy” and “I love you, Junboy” could also be heard. But the overwhelming chant, and understandably so, including from Rob and me was, “Sancho!!!!!” This made lead singer Jett Pangan remark in jest, “Bakit puro si Sancho na lang?” (Sige na nga, Jett, magaling ka rin.)

Sure, Sancho was nervous (this is the legendary The Dawn we’re talking about here). Sure, he got far less rehearsal time than he probably would’ve wanted.

(According to Buddy Zabala, bassist, and a founding member of another seminal band, The Eraserheads, about 80 percent of the music that Sancho played that night was not rehearsed with the band, and that he took care of business on his own, clocking in six to eight hours of playing a day.)

And yes, this was technically only his second gig with the band. However, we couldn’t tell. This inside story genuinely surprised me.

Buddy is the man to credit for Sancho’s joining The Dawn. He brought Sancho to one rehearsal (they’ve been friends for a long while) and, according to the rest of the band (Junboy Leonor is the drummer, but also accompanied Jett on the piano for two songs; keyboard duties were performed by Leni Llapitan of Identity Crisis), the fit was perfect from the first chord played.

The band is still in great form. No one has a voice like Jett’s—a versatile, masculine instrument able to sing musical theater as well as rock. Buddy’s bass playing is visually as well as aurally entertaining, and I’ve not heard a drummer keep time quite like Junboy.

As for Sancho, he was smiling from ear to ear for much of the evening. He’d shake his head, indicating that he’d made a mistake with either a note or a chord. But Buddy would be right there, leading him throughout the evening, a reassuring, steadying force on this nerve-wracking night.

Watching how everyone just seemed so in sync was nothing short of inspiring. The Dawn has been at it for around 27 years, and the singing still sounded brand-new, each number performed with vigor and fire.

On the 45-minute car ride home, Rob and I were still talking about the concert, how great it was, and how fantastic Sancho’s playing was.

Rob recalled how, even at work back then, Sancho would always be playing his guitar. Well, Sancho, now you get to do what it seems you were born to do: Play some kick-ass music with one of the best bands this country has ever produced.

Those six-to-eight hours of practice a day, and the ice packs you needed shortly thereafter, were so worth it.

You are, to us, the stuff of legend.

For a behind-the-scenes peek into the recording of “Habulan,” visit http://www.myxph.com/features/14529/the-dawn-releases-new-single-habulan