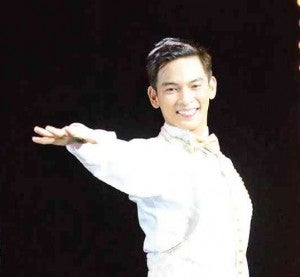 MERCADO. His new performing adventure takes him to London.

LOS ANGELES—A Pinoy singer-dancer-actor who has been performing in Hong Kong Disneyland’s shows and parades is flying to London to be part of the West End production of David Byrne and Fat Boy Slim’s acclaimed musical on the life of Imelda Marcos, “Here Lies Love.”

Born in Manila and raised in Jaro, Iloilo, Aaron Jan Mercado said he was “a bit shocked” to be cast in the musical originally staged in New York that earned awards and rave reviews.

Aaron, who will be swing and learn all the male tracks, is the son of Alfredo Mercado Jr. of Tarlac City and Marifel Mercado of Cotabato City. The 28-year-old danced with Ballet Philippines before joining HK Disneyland as a performer in 2007.

He’s a member of the Filipino group, The Movement, that was HK’s best dance crew champion in the jazz/contemporary category. His special skills include bungee acrobatics and stilt walking.

“Here…,” whose cosponsors include Fil-Am Jhett Tolentino, begins previews at the National’s Dorfman Theatre on Sept. 30 and officially opens on Oct. 13. It runs until Jan. 8 next year. The same NY creative team, led by director Alex Timbers, that made “Here…” land on critics’ 2013 list of best shows, is also behind the London production.

Excerpts of our e-mail interview with Aaron:

How did you learn the good news that you made it to the West End production cast?

I got an e-mail from London saying that they would like to cast me as part of the show. I was shocked. I couldn’t believe it. I didn’t expect it, because I was just having fun at the auditions.

I went back to the Philippines. At first, it was nerve-wracking, because I saw people performing at their best. We were required to dance first, then sing on the first day of the auditions.

After that, they eliminated some applicants. The talents who got callbacks were given material from the musical to learn. We came back the next day. We sang, danced and acted on the second day of auditions.

What are you looking forward to about performing in London?

I’m looking forward to learning new things and honing my talents. I have never been to London. I am excited to have the chance to explore that city.

Were you familiar with David Byrne before auditioning for the part?

Before auditioning, I researched about the musical and learned that David Byrne was behind it. I love what he has done.

When do you leave for London to start rehearsals?

I will leave on Aug. 16. The rehearsals and bootcamp will start on the 18th.

At what age did you start performing? What roles/shows have you done?

I started performing when I was in grade school. I continued training in dance during high school. I started dancing professionally when I joined Ballet Philippines.

What are your thoughts as you embark on your new performing adventure?

I am excited and nervous, because I will be surrounded by very talented people. I feel that this will change my life forever. There are no words to express how happy I am to be part of the cast of “Here Lies Love.”