MANILA, Philippines–As early as 1 p.m. on Wednesday, fans started arriving at the Event Center of SM Megamall for the 6 p.m. appearance of the director and stars of “Rurouni Kenshin: Kyoto Inferno, ” who arrived in Manila on the same day for the movie premiere, the only one held outside Japan.

Fans came from as far as Cavite and Olongapo to see the actors who portrayed their favorite characters in the popular manga series created and illustrated by Nobuhiro Matsuki.In the Philippines, it became popular when it was shown on local TV with the title “Samurai X.”

The actors and the director took more than 30 minutes to walk the red carpet from the mall’s lower ground entrance to the Event Center. They made several stops to oblige fans’ requests for autographs. 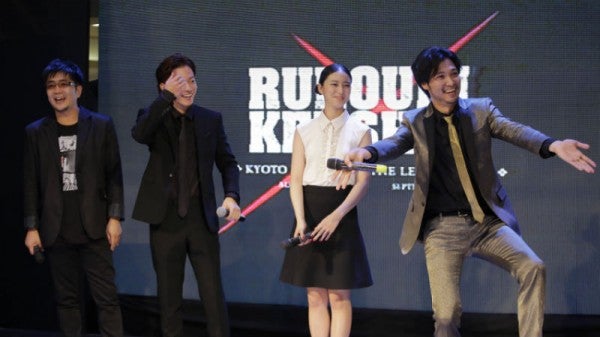 The cast of the Japanese film “Rurouni Kenshin,” from left, director Keishi Otomo, Takeru Satoh, Emi Takei and Munetaka Aoki gesture to supporters, prior to the premiere screening at a mall cinema at suburban Mandaluyong City Wednesday, Aug. 6, 2014. “Rurouni Kenshin” is the second live action film and the first to be premiered outside Japan. AP/BULLIT MARQUEZ

“I am extremely happy that I am able to meet all of you. I heard it (the movie) broke the record of any Japanese film (in the box office). In Japan, it was just shown last week and I can’t believe how fast it will be shown in another country. I thank all of you,” Takeru Satoh said. He greeted the screaming fans by asking “Kumusta kayo?”He also said, “Masaya ako makita kayo.”

Emi Takei said this was her first time to attend a movie premiere in another country.

“Thank you so much for a very warm welcome. I am very surprised,” she said through an interpreter.

“We created a really great movie and I hope everybody will enjoy the movie,” the director said.

Both Keishi Otomo and Munetaka Aoki said they have Facebook accounts and are willing to add their Filipino fans.

During the short program, free movie tickets were given to fans who could answer “Rurouni Kenshin” trivia.

The actors were also asked how they prepared for the movie and what their favorite scenes are.

Takeru Satoh said three months before the shooting, he was always holding his katana and kept on swinging it. He said his favorite scenes in the movie are those showing him running.

Emi Takei, on the other hand, said her favorite is her goodbye scene with Kenshin.

The movie opened in Japan last Aug. 1, and will open in the Philippines on Aug. 20.