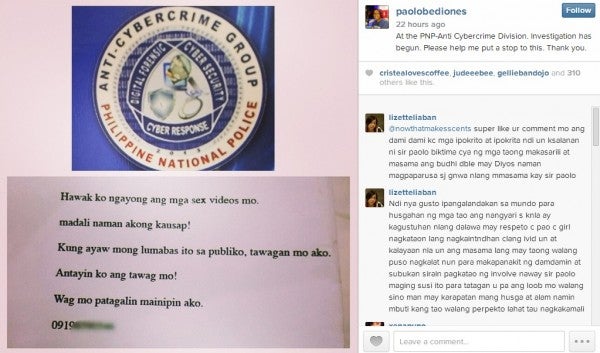 MANILA, Philippines – News anchor and television host Paolo Bediones has brought to police evidence of an alleged blackmail attempt over a sex video showing him and a female partner, a day after he filed a formal complaint before the Anti-Cybercrime Group in Camp Crame.

(I’m in possession of your sex videos. I’m easy to talk to. If you don’t want this to leak to the public, call me. I will wait for your call. Don’t make me wait, I get impatient easily.)

The Philippine National Police (PNP) on Friday said it was investigating the alleged sex video.

“Our probers are checking the links of the uploaded videos on the Internet to trace the ones who uploaded it and make them liable for their acts,” Chief Inspector Jay Guillermo, head of the ACG investigation and intelligence section said.

In his formal complaint Thursday, Bediones claimed that he received two letters threatening him if he refused to comply with the blackmailer’s demands.

The ACG advised Bediones to formally file a complaint so it could take action.

Guillermo said investigators would be checking the video that went viral on social media.

“We told him to file a case so we can formally investigate and trace the uploaders of the video and make them liable under this special law,” Guillermo.

Bediones filed a case for violation of Republic Act 9995 or the Anti-Photo and Video Voyeurism Act of 2009.

Guillermo quoted Bediones saying the private video was five years old and was supposedly stored in the TV host’s laptop.

The laptop, however, was broken and was brought to a technician.

He added that three months after the laptop was repaired, Bediones received a letter supposedly blackmailing him about the sex video.

He said he received another letter but ignored it.

“He ignored it thinking that it will just die down, then the videos were uploaded and this happened,” Guillermo said.

“He said he will cooperate with us and extend all the information he can,” the police official said.

“He really wants those who uploaded this video punished. It was a private matter,” Guillermo added.