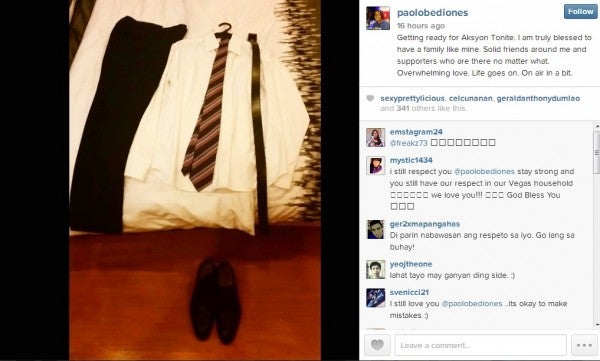 MANILA, Philippines — Television host and news anchor Paolo Bediones, who is embroiled in controversy after the circulation of his alleged sex video, finally broke his silence on social media.

Bediones posted a photo on Monday of his office wardrobe on the photo-sharing site Instagram with the caption: “Getting ready for Aksyon Tonite. I am truly blessed to have a family like mine. Solid friends around me and supporters who are there no matter what. Overwhelming love. Life goes on. On air in a bit.”

Clips of Bediones’ alleged sex video with an unamed female sexy star circulated on the Internet over the weekend.

His home network TV5 has earlier expressed its support for Bediones.

“The recent issue involving our news anchor, Paolo Bediones, on social media is a purely personal and private matter in which TV5 has no involvement or desire to intrude,” TV5 said.

“We accord our employees and talents all respect that are due them for their privacy and personal action or decision. We disapprove strongly the malicious and wanton publication of the video, an act that clearly violates pertinent cybercrime laws. We firmly express our support for our anchor Paolo Bediones in the face of a controversy that represents nothing more than an attempt to smear his reputation,” it said.

A report by entertainment website Philippine Entertainment Portal said that the video was filmed years ago when Bediones was still working for GMA-7.