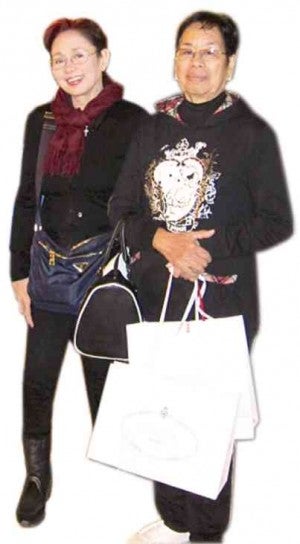 When I heard the sad news about the sudden demise of Aida Fandialan, Batangas Gov. Vilma Santos’ trusted friend/executive assistant, I got worried about the actress-politician. Anyone close to  Ate Vi knows how indispensable Tita Aida was in her life—she never got married; her entire  life was devoted to the governor.

Too bad when I went to the wake, Ate Vi was not there. But I got to speak with her brother, Sonny.

He told me that  Ate Vi  didn’t want to see  Tita Aida in the casket. She just kept crying, he said, while touching Tita Aida’s portrait.

Ate Vi wants to remember her  friend the way she was when she was still alive.

My heartfelt condolences to Ate Vi. No doubt, Tita Aida will continue to watch over her from up above. The Star for All Seasons now has a “Gui-Aida-ding Star” in heaven.

When it rains, it pours for James Yap. After his team San Mig Coffee Mixers’ grand-slam victory in the PBA and being named MVP, James bagged an endorsement deal with ZTE Mobile Philippines. 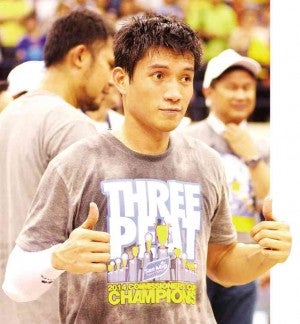 Their mobile phones are dubbed “The Champion’s Choice”—making James a perfect endorser.

It’s always a delight to receive a text message from James. We text in his language, Hiligaynon.

The day after his launch as the new face of ZTE, James and his fab girlfriend Mic Cazzola flew to her homeland, Italy.  They will be back in September.

Mic told me that during their trips, James enjoys pigging out. After such a rigorous PBA season, Mr. MVP more than deserves to stuff himself silly and to have an overdose of amore à  la Italiana.

Since I saw Maegan Aguilar through her darkest hours, I am really happy that she’s got sunshine back in her life. The worst events in our lives can often turn out to be the best thing to happen to us.

“When Tatay (Freddie Aguilar) threw us out of his house, I was scared. Where will we go? What would happen to my 4-year-old daughter Anaya and my 8-month-old baby Mahi Vae? Suddenly, we were homeless. But I realize now that sometimes tragedy is a blessing in disguise.

“I’ve been performing at the lobby of the Edsa Shangri-La Hotel for four evenings a week since the first of July. Recently, Ms Vivian Velez and friends were there. They stayed to watch me and I had a chance to chat with them after my last set. 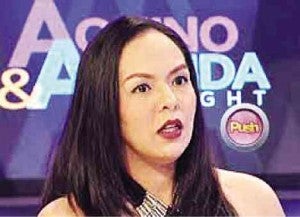 “You are a nice addition to the warm ambience of this lobby,’ she told me. They loved my repertoire of blues and jazz songs, which is very different from the music usually played in  hotel lobbies in the country. My Tito Stephen Pollard, who is British and has traveled to 100 countries, told me most hotel lobbies in  the world play what he calls ‘elevator music.’

“I explained to Ms Velez that Edsa Shangri-La Hotel management decided to change the lineup of singers in their lobby to offer better music to their clientele.

“I am eternally grateful to Simon Côté, a French-Canadian and one of the hotel’s executives, who came up with the novel idea. He made me feel instantly at home.

“Ms Velez, her friends and other prominent guests have expressed their appreciation of the new concept.

“‘The new format is brilliant,’ they would often tell me.

“Before Ms Velez and her pals left, she hugged me and said, ‘I hope they keep you here.’

“Nadia Montenegro and friends have also dropped by, to watch my show. Same with Toni Rose Gayda, who is a very good friend of my Tita Marlene Aguilar. She came to see me with her son John Lim and their group of friends. John and his friends have since returned and watched me again.

“I feel fortunate that I’m getting the support of these celebrities, along with their families and friends. I’m also very happy and grateful because the management and staff of Edsa Shangri-La Hotel have been very kind to me.”

Happy 5th “BeloFIVED” anniversary to Belo Megamall Atrium. Endless thanks to Vicki Belo, Carl Lozada and the efficient staff for being my skin’s best friend.

Congrats to my good friend, China Cojuangco-Gonzalez for being tapped as one of the endorsers of Vintage Restore.