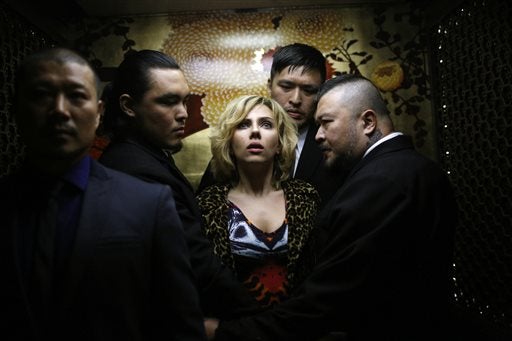 In its first weekend out, the film whose title role is played by Scarlett Johansson, earned $44 million in ticket sales according to box office tracker Exhibitor Relations.

It beat out another box office newcomer, “Hercules” which muscled its way to second place with $29 million.

Behind was “Dawn of the Planet of the Apes,” based on the Pierre Boulle sci-fi tale of humans and chimps clashing to survive, which brought in $16.4 million and fell to third place in its third week out.

Horror-thriller sequel “The Purge: Anarchy” scared up $9.9 million, landing it in fourth.

Meanwhile “Planes: Fire & Rescue,” the Disney computer-animated tale of talking aircraft working to fight blazes and help save a national park, raked in $9.3 million landing it in fifth.

In sixth place with $6 million was comedy “Sex Tape,” starring Cameron Diaz and Jason Segel as two parents trying to keep their homemade sex tape from finding its way onto the Internet.

And summer blockbuster “Transformers: Age of Extinction” made $4.6 million in ticket sales, landing it in seventh place, down two spots from last week. It has earned $236.4 million during its five-week run in theaters.

“And So it Goes,” starring Michael Douglas as a self-centered realtor whose life is interrupted by a granddaughter he never knew he had, and which features Diane Keaton as his neighbor, landed in eighth with $4.6 million.

And rounding out the box office top 10 with $2.7 million was “A Most Wanted Man,” the story of a Chechen Muslim who lands in Germany and becomes embroiled in the war on terror. It features Philip Seymour Hoffman in one of his last performances.