Jinggoy Estrada misses kids, but won’t comment on their fight vs Mo Twister 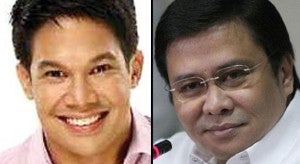 “I do not like to dignify… Ayaw ko patulan. Sumikat pa ‘yun eh,” Estrada, who was at the Sandiganbayan for his bail hearing, said while frowning and shaking his head.

Estrada also begged off when asked about the social media backlash on Jolo, who was being compared to Jeane Napoles, daughter of alleged mastermind Janet Lim-Napoles.

At the height of the controversy, Jeane posted on social media photos of her flashy lifestyle, including her designer clothes, bags, as well as her over-the-top 18th birthday party.

Meanwhile, Jolo has posted on Instagram photos of him with Julian in a private jet, and in a hotel, as well as those of his fancy shoes and a diplomatic passport.

“Huwag na natin pag-usapan ‘yan (Let’s not talk about it),” he told this reporter as he walked away.

The Twitter war started when Mo Twisted tweeted that he wanted to cyberbully Jolo and Julian over their social media posts showing their lavish lifestyle.

San Juan city councilor Jel also defended her brothers from Mo Twister, calling the DJ “too old” to instigate fights on social media.
All Estrada wanted to do is to spend more time with his children, especially as the strict prison rules prevent him from seeing his children.

This is because visiting hours are only until 5 p.m. But the children were only dismissed from school at around the same time, Estrada said.

“Nadidismiss sila ng 5 p.m., eh hanggang 5 p.m. ang visiting hours (They are dismissed from school at 5 p.m., but the visiting hours are only until 5.p.m.),” Estrada said.

Aside from Jel, Julian, and Jolo, Estrada has a young daughter named Julienne.

Estrada faces plunder and graft charges before the Sandiganbayan for his alleged involvement in the pork barrel scam.