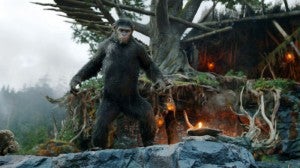 This photo released by Twentieth Century Fox Film Corporation shows Andy Serkis as Caesar in a scene from the film, “Dawn of the Planet of the Apes.” AP

LOS ANGELES – “Dawn of the Planet of the Apes” clung tight to the top of the North American box office for a second week in a row, earning far more than chimp change, industry data showed Sunday.

The “Apes” saga, based on the Pierre Boulle sci-fi tale of humans and chimps clashing to survive, earned $36 million in its second week out, for a total of $139 million during its two weeks in theater so far, according to box office tracker Exhibitor Relations.

Second, third and fourth places were each held by box office newcomers. Horror-thriller “The Purge: Anarchy” scared up $28.4 million in ticket sales for second place in the sequel’s debut week.

Next in line with $18 million was “Planes: Fire & Rescue,” the Disney computer-animated tale of talking aircraft working to fight blazes and help save a national park. It follows on the heels of last year’s “Planes.”

In fourth with $15 million was rom-com “Sex Tape,” starring Cameron Diaz and Jason Segel as two parents trying to keep their homemade sex tape from finding its way onto the Internet.

“Transformers: Age of Extinction” was pushed to fifth place with $10 million or $227 million in total ticket sales over four weeks.

In sixth was comic romp “Tammy,” starring Melissa McCarthy, whose road trip with her alcoholic grandmother, played by Susan Sarandon, brought in $7.6 million in ticket sales.

Summer blockbuster sequel “How to Train Your Dragon 2” raked in $3.8 million to come in eighth.

And “Maleficent,” the modern retelling of the life of Sleeping Beauty’s arch-nemesis, as played by Angelina Jolie, grossed $3.3 million to land in ninth place.

Rounding out the top 10 was family-friendly sci-fi flick “Earth to Echo,” which earned $3.26 million in its third week.

TAGS: cinema, Dawn of the Planet of the Apes, Entertainment, Movies