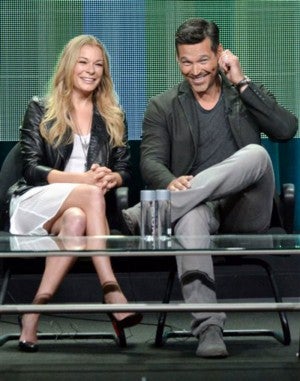 BEVERLY HILLS, California — Tabloid targets LeAnn Rimes and Eddie Cibrian are jumping into the fray with their own cable TV reality show, although the couple plans to keep Cibrian’s two children out of it.

Cibrian’s two sons — ages 11 and seven — with ex-wife Brandi Glanville don’t appear in “LeAnn & Eddie,” an eight-episode series debuting Thursday on VH1. Glanville appears on “The Real Housewives of Beverly Hills.” Rimes, Cibrian and Glanville have had a history of rocky exchanges in recent years.

“We do discuss Eddie’s ex-wife when it needed to be discussed,” Rimes told the summer TV critics’ meeting. “You can’t really do a show without talking about that.”

Cibrian said the show isn’t an opportunity to fire back at the couple’s critics. Instead, the actor said it’s a chance to mock the rumors that have surrounded them since he and Rimes got together in 2009, when they were both married to others.

“Everyone has used our lives as entertainment, and so we wanted to actually kind of take our life back and have fun with our story,” said Rimes, a singer and actress.

Rimes and Cibrian pitched the show to the network and are producers on it.

‘There are some things that are kind of embarrassing that we left on this because we thought it was funny,” Cibrian said.

Reality TV hasn’t always been kind to other couples: Nick Lachey and Jessica Simpson and Khloe Kardashian and Lamar Odom all divorced, while Tori Spelling and Dean McDermott’s marriage has been under strain.

“It seems to happen,” Rimes said. “Maybe we will beat it. Maybe we won’t.”

Expensive gift for one lady love