A palace built on strawberry fields 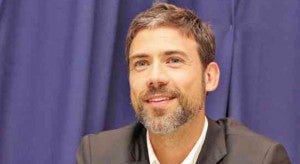 ADAM Rayner plays “the tyrant in waiting” in the action/thriller/drama .Photos by Ruben V. Nepales

LOS ANGELES— Inside sound stages built on strawberry fields in Kfar Saba, north of Tel Aviv, is a surprising sight: Elaborate sets making up the palace of a Middle Eastern country. Almost as surprising is that this palace set in a rural area is for an American TV series, “Tyrant.” The new series by FX has good pedigree. It was created by Gideon Raff, the executive producer of the acclaimed “Homeland,” and one of the producers is Howard Gordon, whose credits include “24,” “Homeland” and “The X-Files.”

The pilot was directed by David Yates, who helmed the final four “Harry Potter” movies; he took over from Ang Lee, who had to bow out to rest after four grueling years of making “Life of Pi.”

The action/drama/thriller series, which FX and HBO vied for in a bidding war, offers a promising premise: Bassam Al Fayeed (Adam Rayner) is living as Barry, a pediatrician, with his American wife, Molly (Jennifer Finnigan), and two teenage children, Sammy (who is gay) and Emma. Barry has distanced himself for nearly 20 years from his father, Khaled Al Fayeed, the dictator of Abbudin, a fictitious country.

The wedding of Barry’s nephew, the son of his older brother Jamal (Ashraf Barhom), a ruthless man who takes over as the president upon their father’s death, leads the American family to come to war-torn Abbudin. Jamal is married to Leila (Moran Atias). This development throws the family, living a simple life in Pasadena, California, into cultural conflicts and a nation’s turbulent politics. The characters cross paths with Abbudin’s key figures, including John Tucker (Justin Kirk), a US diplomat.

After our tour of the various painstakingly detailed rooms of the palace set and watching a scene between Ashraf and Moran, we returned to Tel Aviv for interviews with the key cast at the David InterContinental Hotel.

“If you can ever envision taking a strawberry field, putting tent-like structures and then walking in and seeing that magical world that, my God, I believe they created in weeks,” said Jennifer of the sound stages that we just came from. The three-time Daytime Emmy Award winner for the soap, “The Bold and the Beautiful,” is noted for her breakout role in Jerry Bruckheimer’s TV series, “Close to Home.”

“They had everything against them,” Jennifer added. “When we first got here, it was the rainy season. There were some particularly heavy rains. They had to evacuate. They were up against every possible obstacle. And they were still able to achieve that.”

“I know that they shot some of ‘Homeland’ on location here,” she pointed out. “There’s an authenticity, obviously—the locations, sounds, the people.” Laughing, she quipped, “We wouldn’t find this in Burbank (California).”

Justin, who was paired with Jennifer in the interview, teased her, “I need to show you Burbank.”

Jennifer said of her character’s family in the pilot episode: “I love that you do get to see in the beginning, for one instant, what their lives are normally like. She’s making breakfast around the table. She’s puttering around in the kitchen and she’s about to go to work. She’s sending the kids off to school.”

“Then cut to the next time we see the family at breakfast (at the palace in Abbudin). They’re at this massive breakfast table and there are servants putting down platters of food. It’s almost too big to wrap her brain around in. Once that subsides, once her husband becomes more ensconced in the political aspects, I believe she will start to feel like a First Lady of sorts. Then I guess we start to see the seduction (of power).”

With a grin, Justin remarked about the series’ distant location site: “We thought it was going to be in Albuquerque, New Mexico— you know, where they did ‘Breaking Bad.’ When they told us we were coming here, they gave me a day to quit if I wanted to. I could have because we hadn’t done the pilot yet. I sometimes balk at going far away.

“I was actually in Las Vegas with my friend who had a show there. We sat around the pool drinking all day. I was texting and calling friends and then I finally realized, I am such a… that I can’t go. Of course, now that I’ve been here, I get homesick but in the end, Jennifer and I spend a lot of time together because we have plenty of days off. I see her more often than I see my best friends at home probably because when I’m at home, I’m living in my little world.”

The Montreal-born actress, who is based in LA, doesn’t seem to be as homesick as Justin. She added that her husband, actor Jonathan Silverman, comes once a month from the US and 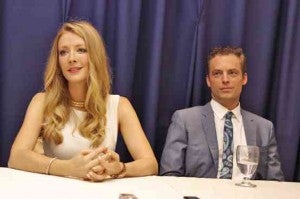 JENNIFER Finnigan doesn’t seem to be as homesick as costar Justin Kirk.

brings her clothes, depending on the season in Israel, and stuff from Whole Foods Market.

Moran, an Israeli actress who modeled and acted in Europe and US, narrated how she and Ashraf summed up their volatile relationship in one scene: “The director said, ‘You only have 40 seconds in one scene to let viewers understand the entire relationship.’ We discussed the dynamics between my husband and me. I see him in a certain way and with whoever he is dealing with in the beginning. I see him in a certain fashion with his father. So what are the borders with us? What will we never do and what will we do? We discussed it and then did the opposite.

“I came in and thought, how do I get this man to listen to me, his wife? I am happy I didn’t tell him but I slapped him and then he slapped me back.”

The spontaneous slapping stunned the crew and onlookers. “We shot in a real hospital in Morocco,” Moran said. “It was the noisiest set we have ever been to. Nobody ever kept quiet. We can’t tell the patients to shush because we were filming. But after that slap, there was an absolute silence on the set. The producers came out and the director was like, ‘Maybe we shouldn’t do that again.’ We were like, ‘Yeah, we are not going to do that again because that f***ing hurt!’ ”

Fire in the dynamics

“There’s fire in the dynamics between the two,” added the actress who modeled for Roberto Cavalli and hosted a popular talk show in Italy. “If it was in Europe, it’s like an Italian love affair. Wouldn’t you want to be in an Italian love affair once in your life? I have experienced it and it’s the best. Maybe it’s not as healthy but it’s true. Didn’t you imagine yourself like in the hands of Marcello Mastroianni?”

Ashraf, teamed up with Moran in our chat, remarked, “Tyrants are made, not born. In my research, I was trying to understand why there is tyranny. I found that the main thing that makes someone a tyrant is arrogance. Arrogance makes the human being forget his position and makes him more obsessive. For example, he forgets that he will die someday. He thinks he’s immortal and he can do whatever he wants to do. And that no one will stop him.”

Born in Galilee, Israel, Ashraf is enjoying a burgeoning international career with such credits as “300: Rise of an Empire,” “Clash of the Titans” and Ralph Fiennes’ “Coriolanus.”

England-born Adam first noticed Ashraf in “Coriolanus.” “I didn’t know that was Ashraf but I recognized him from that,” said the actor who has appeared in TV shows and theater in London. “He’s a tremendously powerful actor. He’s ferocious and has incredible energy. It’s wonderful working with him because I try and match that visceral power that he has. But we’re also very different people. And we’re very different characters. I hope that strange tension will work well.”

On his own character, who returns to his homeland after a self-imposed exile in the LA area, Adam said, “I’m the tyrant in waiting because we have various candidates for the ‘Tyrant’ title. We are only six episodes in and I don’t know the full arc. The original intention was to see this character move from an All-American guy who’s a great guy, treats everyone really well and has those values that we’re all familiar with and take him down a darker road.”

Asked if he has any tyrannical traits, Adam replied with a smile, “You’d have to ask Lucy (Brown, British actress), my girlfriend. That’s probably where it comes out. I like things my own way but I’m quite soft about it… that’s the most insidious kind of tyranny, isn’t it? I’m not sort of raving the whole time. I get quite grumpy if I don’t get my own way.” 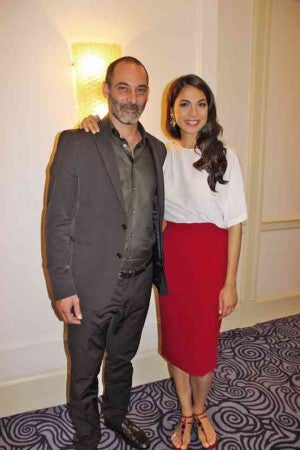 Barry seemed unfazed by safety concerns about filming in Israel. “About a month and a half ago, we were shooting a scene and a gunfight broke right next to us on the adjacent street,” he said. “This was not necessarily something that happens when you’re shooting on a lot at Fox. Sometimes I do (get concerned) but it’s quite rare. It’s not something that I come to work worrying about. Sadly, there are gunfights and car bombs. We have police protection. I am aware that it is potentially a slightly more dangerous environment to work in than London or LA.”

Gideon has since left the series. But Howard, who runs the show, is leaving no stone unturned to make “Tyrant” as successful as his other shows.

While the show has drawn some complaints about its depiction of Arabs and Muslims, “Tyrant” has garnered some positive feedback for including both in the creative process. Howard, who has reached out to the Muslim Public Affairs Council (MPAC), was quoted by The Daily Beast’s Dean Obeidallah as saying, “MPAC has had a significant impact on the development of this project from its inception. I tried to address their concerns regarding cultural inaccuracies and potentially incendiary characterizations. I may not always have been entirely successful, but the dialogue has always been open and fluid.”