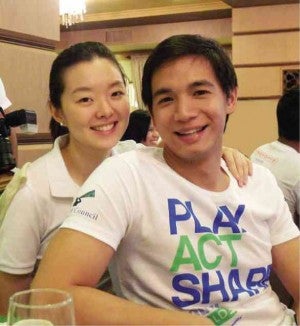 Many dribbles ago, I was a PBA cager’s wife. Although my ex-husband and I have changed courts, I am still hooked on watching basketball. I am overjoyed that the team I am rooting for, San Mig Coffee Mixers (SMC), made it to the Governor’s Cup Finals.

They are dead set on clinching a Grand-Slam victory.

I can hardly wait to watch the game live on Saturday with the tres charmante Italian girlfriend of my amigo, James Yap, Michela “Mic” Cazzola. With an inspiration like her, how can James fail?

The SMC guys are up against Rain or Shine Elasto Painters (ROS).

Since Chris Tiu (of ROS) and his fab wife, Clarisse, are my friends, as well, I’m quite torn.

Chris knows that I’m close to James and Mic, so he just told me: “Cheer for me, too.” I promised Chris that even if I get to sit on the San Mig side, I will clap whenever he scores.

Good luck, James and Chris! Win or lose, you’ll always be winners on-and off-court. And to Mic and Clarisse, continue to be MVPs (Most Valuable Partners) to James and Chris.

Here’s my tête-à-tête with Mic:

What are your thoughts about SMC’s Grand-Slam bid?

I’m really proud of James and the whole team. I’m amazed at how focused, prepared and motivated they all are. James said he’s not thinking of the Grand Slam. He takes it one game at a time. They practice every day for hours. They are good examples of what hard work is. I super admire their coach, Tim Cone. He’s the best.

How do you help James relax after a game?

We eat, watch movies or surf the Net together.

How do you motivate James before a game?

I actually don’t have much to say. I always tell him to be confident.

What are James’ do’s and don’ts before a game?

He must have a good meal and he doesn’t want to be bothered.

How does James handle defeat?

He’s a professional and a veteran. He acknowledges losing and then prepares himself for the next game. He doesn’t hold grudges.

Here’s my one-on-one with Chris Tiu:

What’s your game plan for the championship?

That will all depend on our coach, Yeng Guiao.

That’s a difficult question. Hmm… maybe our hunger for the championship. It’s been a while.

What makes it tough to beat San Mig? 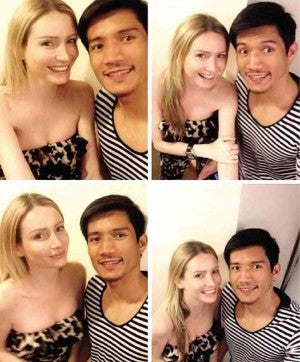 They have a genius coach. Their big men are versatile and can guard wing men. They are bigger and taller. They are more experienced playing in a finals series.

What are your rituals before a game?

I pray and offer my game to the Lord.

What lessons has basketball taught you that are applicable to life in general?

Teamwork, discipline, rising above adversity, perseverance, humility in victory, graciousness in defeat. The game is not always fair—just like life—but you just have to keep going. Deal with the bullies and the nice guys. Do your best but in the end, accept God’s will.

Robert Labayen, ABS-CBN Creative Communications Management head, was recently recognized by the Creative Guild of the Philippines with its prestigious Lifetime Achievement Award for his contributions to the Philippine advertising industry.

“Instead of talking about how good ABS-CBN is, we talk about how good the Filipino is. That’s what I usually tell my team. Our work should touch Filipinos’ lives and give them hope,” he explained.

Since he joined the network in 2004, Labayen has led his team in producing station IDs that aim to inspire Filipinos.

When it comes to creative juices, Labayen has a bottomless reservoir.

Happy birthday to my forever friend, Louie Heredia. Even if we don’t see each other often, our bond remains intact.