Shay Mitchell, Lea Salonga’s niece, a star in her own right | Inquirer Entertainment

Shay Mitchell, Lea Salonga’s niece, a star in her own right 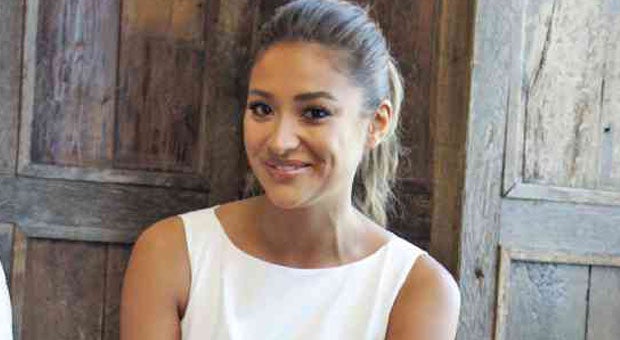 SHE FINDS it cool to see her mom’s birthplace. photo by ruben nepales

LOS ANGELES—“What always trips me about Shay is that she plays the tomboy in the show. But she’s by far the most glamorous of all of us,” Lucy Hale, who plays Aria Montgomery in “Pretty Little Liars,” said about her costar, Filipino-Canadian Shay Mitchell (as Emily Fields). 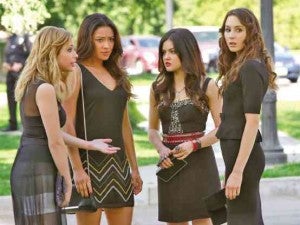 The niece of Lea Salonga (Shay’s mom, Precious Garcia, and Lea are first cousins) wore a white dress, her hair pulled back in a ponytail. “Shay can make Converse, Adidas and Puma look so sexy,” Lucy added, laughing. “That’s the funniest thing—she’s the opposite of her character.”

In the TV drama/mystery/thriller based on the best-selling book series by Sara Shepard, Shay’s Emily is a lesbian whose best friend, Alison DiLaurentis (Sasha Pieterse), mysteriously disappeared. Emily and her three teen girlfriends, Aria, Spencer and Hanna thought Alison had died and believed their secrets were safe forever. But the girls began getting ominous messages from someone named “A” who knew their intimate secrets.

In Season 5, which premiered this month in the United States, among the revelations is that Alison is alive. This shocks everyone, especially the gang of 16-year-olds.

“Alison was Emily’s first love, the person who made her question her sexuality,” said Shay. “Now that Alison is back, it’s a love triangle with Emily and Paige (Lindsey Shaw). Alison and Paige were never the best of friends, so it’s going to be interesting when Alison is back in school and in front of Paige, who does not know of Emily and Alison’s previous relationship.”

In the Philippines, “Pretty Little Liars” is aired on ETC. The Toronto-born actress has visited the country twice.

“I first went there for the opening of American Eagle,” said the brown beauty whose father, Mark Mitchell, is Irish-Scottish. “It was so much fun. The people there are so genuine and sweet. Lucy has also been to the Philippines. She was like, ‘They are so sweet and nice over there.’ It was really cool to be where my mom was born, experience the local culture”

She gushed, “And then… Palawan—there’s nothing like that place. It was my favorite (she also went to Boracay). So when I find some downtime, that’s going to be my next vacation spot.” 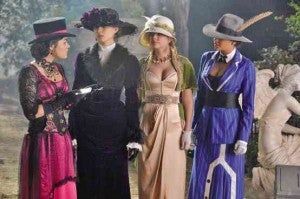 LUCY, Troian, Ashley and Shay wore period costumes in a Halloween episode of the popular show.

We asked Troian and Ashley for their take on Shay. Troian began, “Shay and I grabbed on to each other, especially in the beginning, because you guys (addressing Lucy and Ashley) had known each other longer. Shay and I were always paired together for interviews.”

Smiling now, Troian continued, “I was like, ‘I will wing it—it will be off the cuff.’ But Shay, because she was the homosexual character, had to address this very important issue. I would go blah, blah, blah,  just going off, and Shay would whip out this five-minute rehearsed speech, then turn around and say the funniest thing that you heard all day.”

She cited Shay’s positive attitude: “She’s the happiest person I know. I am not—not at all. I struggle to be happy. Just being in Shay’s company, there’s like this little sunbeam that reaches a frozen crevice in my heart. I would say that I’ve learned so much about being a happy, confident woman from Shay in the past five years.”

Ashley said, “Shay calls me ‘Little Sister’ but I am only two years younger. She’s just the best person. We have so much fun—she makes everybody laugh. But she’s very professional. She’s just been an amazing person for all three of us to work with. She’s really inspiring. She does so much work for all these charities… I look up to her.”

Back to the show: Shay was asked who she thinks the mysterious “A” is. She replied, “We’d all love to be ‘A,’ but I’m just as clueless as everybody else. As soon as I think it’s one person, it turns out that it’s not. I thought it was a parent, someone from Spencer’s crazy family. But I am excited like the fans to find out.”

Speaking of fans, two of the lead actresses’ moms are among the most rabid, according to Shay. “Ashley’s mom is definitely the show’s number one fan. Second to her might be my mom, because she watches each episode more than once. She catches it on East Coast time and then West Coast time because she thinks she’s a detective. Her favorite shows are all crime shows. I wouldn’t be surprised if she had a hidden notebook with all the clues, trying to figure out who ‘A’ is.”

Shay’s parents nurtured her innate love for the performing arts. At 5, Shay began dance lessons, which led to competitions, with her classmates, against other dance schools in Toronto. When Shay was 10, the family moved to Vancouver, where she was hired after responding to an open call for teen and preteen girl models.

In her late teens, Shay modeled in cities abroad, including Barcelona, Hong Kong and Bangkok. Then she returned to Toronto, where she started appearing in TV shows and music videos.

Can she keep secrets in real life? “Good-news secrets are hard for me to keep,” she said with a grin. “But serious things and my personal secrets—I will take them to the grave.”

Away from the set, Shay and her friend, Michaela Blaney, maintain a blog. “It’s a lifestyle blog,” she said. “I discuss different subjects—a little bit of fashion, beauty, cooking. But we (she and her costars) all come to the table when we are trying out new things. We talk about recipes.”

Of her cast mates, Shay remarked: “I know who to go to for different things. That’s the great thing. We are all so different—which makes it so interesting when we come and be like, hey, I know if I have a certain question, I can go to one of the girls. And she will be able to answer it.”