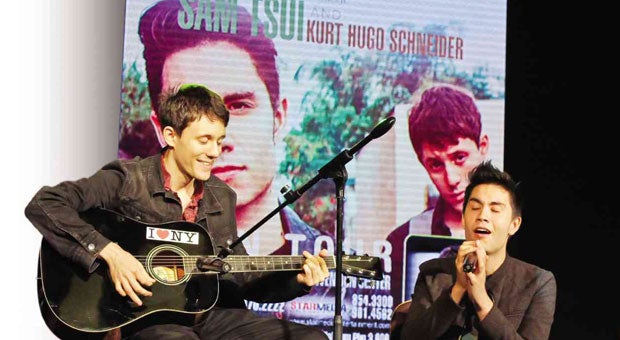 Video-sharing sites like YouTube have, in recent years, leveled the playing field for many aspiring independent music artists, who wouldn’t have had the resources to put out their work.

In July 2009, the duo came out with a Michael Jackson medley, which had Kurt—through the magic of editing—singing like a one-man band, modifying his voice for lead vocals and harmonies. The video soon went viral (it now has over 32 million hits). The following year, Sam and Kurt went on “The Oprah Winfrey Show” and “The Ellen DeGeneres Show.”

“Because of YouTube, we are able to share our music easily,” said Sam, vocalist-songwriter, at a recent press con. Kurt plays the instruments and produces the videos.

Thanks to social media, Sam noted, big record companies no longer have monopoly over music distribution.

Sam and Kurt, who grew up in the same Pennsylvania neighborhood, perform tonight at SMX Convention Center. (Tickets are available at SM Tickets and TicketWorld.)

“YouTube allows us to connect with people from random places in the world,” Sam said. “It feels surreal, being here [but] Filipinos are big music fans and lots of them are incredible vocalists, so we should do shows here.”

Although Sam and Kurt, both 25, made it big doing covers, they are now churning out their own material. Last year, Kurt produced Sam’s first full-length original record, “Make It Up,” which contains 14 tracks, including “Don’t Want an Ending,” whose video has registered over 10 million views.

“The covers provided good initial exposure, but the original stuff is where our hearts live,” Sam said.

“Our future would probably involve expanding into other aspects of the music industry,” Sam said. “We’ve left the academic stuff behind.”

Would you rather do covers or original songs?

Sam: People love hearing familiar songs in new, exciting ways. We do that with covers. But originals are more special to us because the words and music are ours. When people sing back, it’s the most amazing feeling.

Is a great music video as important as having a great song?

Kurt: Visuals are just as important as great music. That’s why we always try to come up with new ideas in our videos … things that we ourselves would find cool.

Have you ever been approached by record companies?

Sam: Those who have social media followings are of great interest to record labels. It’s a very interesting time in the industry because people are doing things on their own.

You decided to come up with “Make It Up” independently.

Sam: It’s important for us to do stuff on our own terms and have control, to do very well even without label support. We have ownership of that success.

Have fans become more demanding after your success?

Kurt: You just have to be consistent and not wait for months before putting something out. Give fans quality content all the time.

What advice would you give other aspiring YouTube artists?

Kurt: Don’t give up. We’ve been putting up videos before the Michael Jackson one went viral, and not one of them got many views.