No show biz yet for Atasha Muhlach 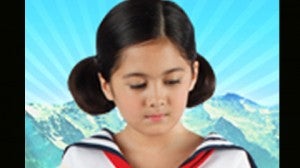 With Atasha Muhlach’s coming theatrical stage debut as Brigitta von Trapp in a local adaptation of the “The Sound of Music,” people are speculating that acting in movies would be the inevitable next step for Aga and Charlene’s 9-year-old daughter.

Not so fast, Aga said. Although he’s happy and excited about Atasha landing a role in the classic musical, the Kapatid actor stressed that he won’t be allowing her daughter to accept future projects until she finishes high school.

Aga, who didn’t know that Atasha went to the auditions, found out about it while preparing for a weekend family trip to Mataas na Kahoy in Batangas.

Aga gave the assurance, however, that should Atasha decide to follow in his footsteps and pursue a show-biz career in the future, the family will be there to support her. “Hindi ko naman ipagkakait sa kanya ang hanapbuhay naming ito,” he said.

How about Atasha’s twin brother Andres? Does he also share the same interest in acting?

Aga has just returned from a taxing 10-day trip in the United States, where he shot the preliminary episodes of his travel and educational program “Pinoy Explorer.” But more than experiencing all the breathtaking sights and places, Aga said the journey was also a self-discovery.

He said he found his calling.  “Napakabulol kong tao, but I’m getting better at parang kumaklaro na yung pagsasalita ko.”

Another thing Aga enjoyed about hosting the show was the anonymity he had throughout his travels. “I mean, kahit magsisigaw pa ’ko sa gitna ng maraming tao, wala namang nakakakilala sa ’kin (Even if I shout in the middle of a crowd, no one will know who I am),” he said.