Aegis in the time of ‘delubyo’ 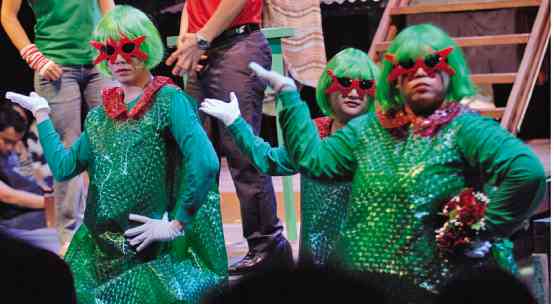 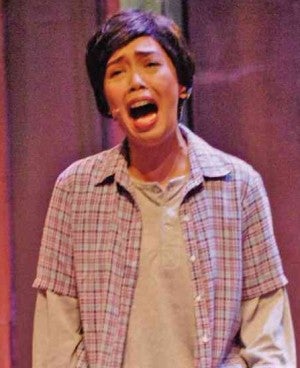 As soon as the theater door opens (on Sunday night) and the audience is ushered in for “Rak of Aegis”—and I see the stage—I am transported to a familiar eskinita by the estero, the one where I walk my dog daily.

The crowd reminds me of the rush-hour LRT mob. I want to run out again for air.

But it is this jammed and familiar atmosphere that draws me into the heart of the show’s Barangay Venizia—a near-slum neighborhood that has been flooded for quite a while, damning the residents’ shoe-manufacturing livelihood.

Then the characters appear onstage. Even the minor ones are as familiar as the next-door neighbors—the home-service manicurist, balut vendor, sari-sari store owner, men in jerseys, the vested barangay tanod with his stick, the screaming gay and the quiet butch.

Yes, they are all here, wearing back stories like badges: The Love Triangle. The Emasculated Father. The Hopeful Singer Aileen, who dreams of being a YouTube sensation and guesting on “The Ellen DeGeneres Show.” Every story has a perfect Aegis theme. 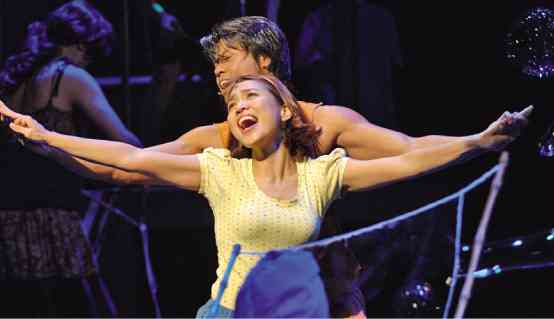 LOVERS Aicelle Santos as Aileen and Jerald Napoles as Tolits 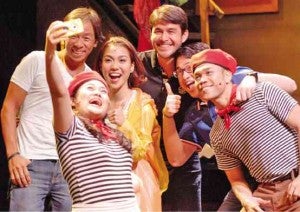 Speaking of the familiar, there are corrugated roofs aplenty, multiple electric meters on a single post, drooping clotheslines, wooden plank bridges, murk and mud. What is not visible is sung about, screamed Aegis-style, the better to flush out the rats. (Aegis is a pop-rock band known for lung-busting power ballads.)

The recreation of rain, with thunder to boot, is a realistic and brilliant backdrop for the much-anticipated “Basang-Basa sa Ulan,” rendered effortlessly by Aicelle Santos.

This is not just the story of a flood in terms of water. The blast, blare and poetry of Aegis  songs are too familiar, too painful and brutal, sometimes too heartbreakingly funny to be forgettable. 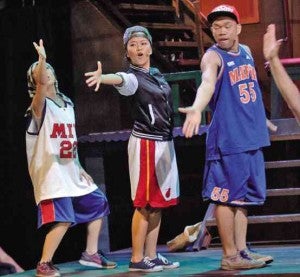 For all of 140 minutes, “Rak of Aegis” thus overflows with some of the most piercing OPM ever written. It is this close to being too much and migraine-inducing. Curiously, when a threshold looms, the homosexual character steps in with a number in Priscilla, Queer of the Estero style, and Barangay Audience is liberated from queasiness.

The soft and wistful “Ilog” is presented with three very gay Christmas trees. Prepare to be stunned.

Much of the humor is subtle. (How to sing well? Just open your mouth. No, wider!) Sometimes it’s too fast, gone forever if not caught in a split-second.

Even so, the audience seems to have a lot of fun. People love the comedy and appreciate the performers’ extreme voice ranges, like Robert Seña’s as Kiel. Otherwise, lyrics are coughed out in compelling comedy, as Kakai Bautista’s Mercy does. Jerald Napoles’ Tolits charms with pickup lines … and muscles. 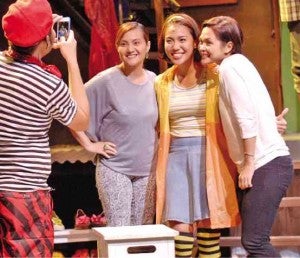 The audience is advised at the beginning of the show to not sing along, even if they know the lyrics by heart. Intermission is introduced as a break for the performers’ throats.

No one is too young to watch “Rak of Aegis.” It is a decent, even wholesome, family show. Ryan Agoncillo and Judy Ann Santos turned up with their two kids; Kim Atienza, with his daughters.

“Rak of Aegis” says that when all else is lost, dignity should prevail. Also, that a sense of community is valuable, especially for many who have been calloused by heartbreak; or those jaded by tragedy and turbulence, news of leptospirosis and dengue outbreaks, and natural calamities like flood, earthquakes and volcanic eruptions. 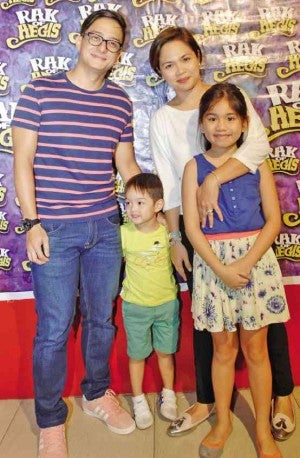 Some of Aegis lyrics are paraphrased for effect, for instance,   “Ang delubyo, nami-miss ko.”

This level of humor distinguishes the Filipino from the rest of the world. We can take anything.