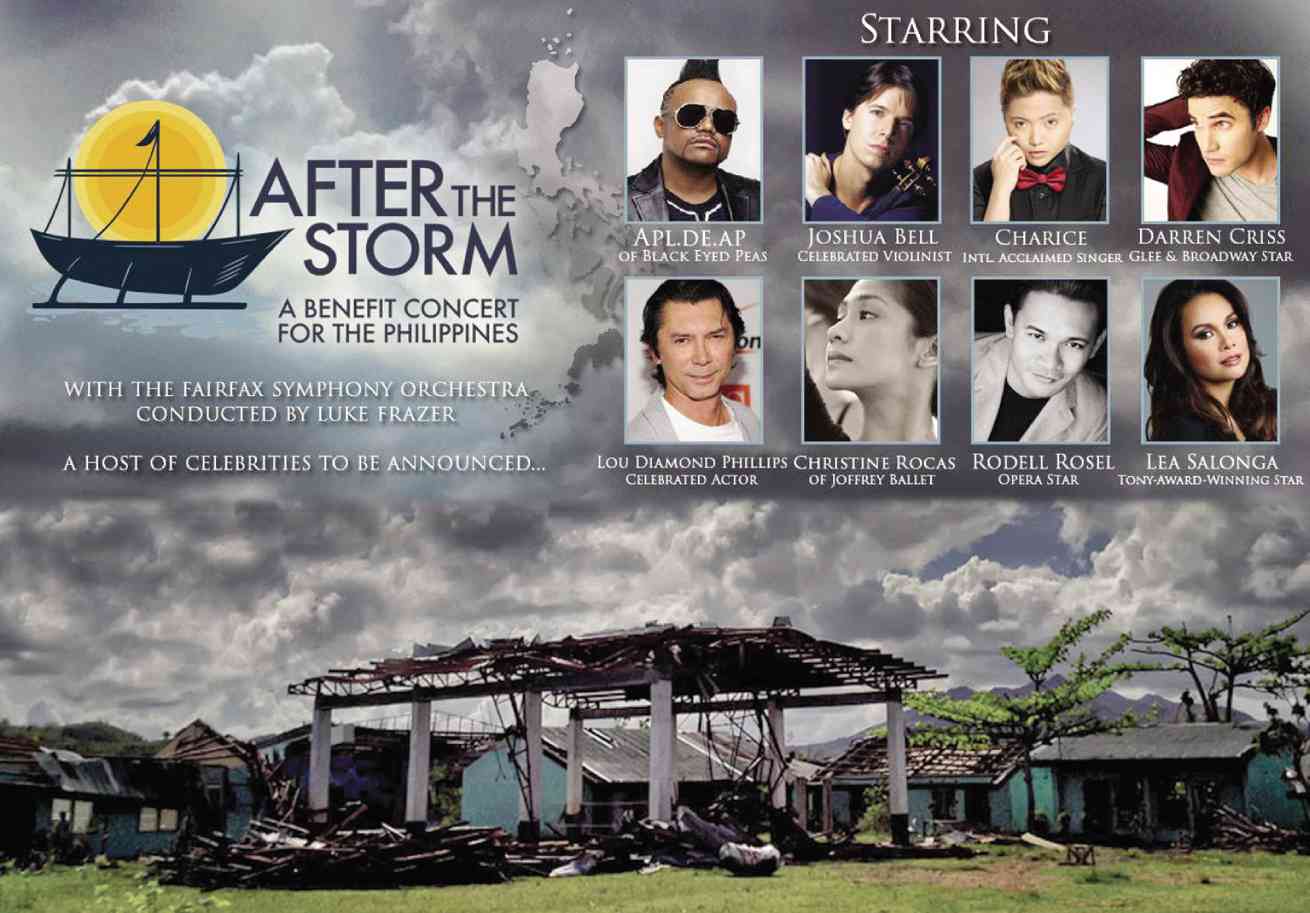 DRAMATIC poster for the fund-raiser

WASHINGTON—I wrote this while everything was fresh in my mind, to make sure I put in as many details as possible.

Last night (it’s early Monday morning here) we performed “After the Storm,” a concert for the benefit of Supertyphoon “Yolanda” survivors. For me, it was a reminder that there are those who still need help. We cannot forget them, hence this tap on the shoulder. Yes, other matters take up our collective thoughts—matters of personal, professional, political and societal importance. But still. We have brothers and sisters hoping they are remembered.

As weighted as that sounds, we all wanted to enjoy doing the show.

Rehearsals at the Kennedy Center were quite relaxed. My brother Gerard had sent ahead the music I was going to sing—a mash-up of “I Dreamed a Dream” and “On My Own”; “A Whole New World,” which I would be doing with Darren Criss (“Glee”); and an excerpt from “Bayan Ko” (originally arranged by Marvin Querido, with additional orchestrations by Gerard). “Bayan Ko” would segue into “Climb Every Mountain,” arranged for this concert by Jamie Wind Whitmarsh. We had the Fairfax Symphony Orchestra accompanying us, conducted by their resident pops conductor, Luke Frazier.

A ton of fun

A few of the artists rehearsed the day before. Others, due to various professional obligations, got only a moment on the Kennedy Center stage the day of the show. However, everyone got a proper sound check and final rehearsal,  with plenty of time to prepare for the actual performance.

Although the reason for the evening’s concert was serious and grave, the actual show was actually a ton of fun to perform. Lou Diamond Phillips served as host (and what a blast he was to watch!). He peppered his introductions with humor and light, which made the evening fly. On the front of extreme stage left was a sign language interpreter (two of them, a man and a woman, were tag-teaming), and it was fantastic just how much of the speeches and songs they were able to translate.

As a last-minute replacement for Joshua Bell, violinist Philippe Quint was a joy to watch. Besides being handsome, with great stage presence, he was an impressive instrumentalist, able to balance technical proficiency with emotion. At the after-party, he expressed a desire to come to the Philippines to play. I sure hope he does pay us a visit.

I performed my “Les Miz” mash-up as a proud representative of the musical theater community. Immediately following that, I brought Darren out for our “A Whole New World” duet, telling the audience that we had performed this song together two times before—in a tribute to Alan Menken in Los Angeles and in a West Village piano bar in New York City, after having thrown back a few cocktails.

Many members of the audience seated in the first few rows sang along. Lou then appeared, prancing and dancing around us, which sent the whole crowd into fits of laughter.

The performances that evening were all jaw-dropping wonderful. Christine Rocas of the Joffrey Ballet (she was once with Ballet Manila) danced “The Swan,” the same one I had seen Lisa Macuja perform. (Lisa, you would’ve been so proud of Christine; she was so beautiful!) Tenor Rodell Rosel sang “Nessun Dorma,” one of my favorite arias. He sang un-amplified, with the full orchestra and a ladies choir behind him. No microphone. The man is a beast, and he received a rousing ovation.