As an orange moon quietly rose over the waters, the blues simmered, crackled and rocked in Puerto Nirvana. The Puerto Galera Bluesfest, an open-air acoustic blues concert that showcased Manila-based and local talents, was staged recently at the resort-hotel located in one of Oriental Mindoro’s jigsaw coves.

Apparently the first purely blues gig in the scenic tourist destination in a long while, the pilot fest was headlined by the Lofamia Acoustic Brotherhood, souped-up acoustic face of the Ian Lofamia Blues Band, a favorite in Metro Manila’s blues bar scene. 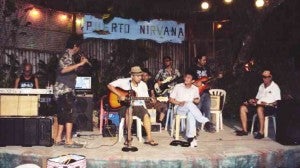 MUSICIANS onstage at the blues festival were all on the same page. When they stepped down, it was with wide, happy grins. CONTRIBUTED PHOTO

It was veteran bluesman Rickie Cui’s idea to bring the music to Puerto Galera, being a firm believer in starting things at the grassroots level if you want anything to grow. “Puerto Galera deserves more than just reggae and honky-tonk music. I thought that bringing in a good blues band from Manila could start something,” he told the Inquirer after the show.

Fortunately, expats Thorleif Don Bluesmann, Ole Torbergsen, Tom Harry Sund and Kjell Skarshaug—four of Manila’s “crazy Norwegians” who’ve been part of the metro’s growing blues scene for the past three years, shared the same belief and were only too happy to bankroll the project. That they loved the place when they visited last Holy Week didn’t hurt, either.

The small but appreciative audience of mostly foreign tourists were treated to a night of great acoustic blues. It was a magical night; everyone on stage was on the same page and, when they stepped down, it was with wide, silly, happy grins.

The Brotherhood has been playing seamlessly together as a regular Wednesday act at H & J in Makati, but perhaps because of the addition of Rickie’s Hammond or how the open air in Puerto Galera carries sound, all the musicians gave inspired performances.

Lofamia was at his usual awesome best, whether filling in the gaps with flautist Kiddo Kalaw on Cui’s rendition of the Hoagy Carmichael crossover classic “Georgia on My Mind,” or leading individual solos on the anthemic “Catfish Blues,” otherwise known as “Rolling Stone.”

Popular BGC and Intramuros busker Hoochie Coochie Mikkie’s powerful, raspy voice commanded attention as ever, and the group’s foot-stomping reincarnation of Muddy Waters’ “Can’t Be Satisfied” was one of those tunes you took home in your head.

Bassist Spencer Rymonte was particularly inspired and he knew it, as were guitarists Arvin Austria, Jimi James and teen jammer Joko Reantaso. The night was capped with an extended fun jam on the persistent Jimi Hendrix favorite, “Little Wing,” with master slider Haro Echter setting the mood and finally letting loose on his lap steel.

“The best acoustic happening I’ve heard in the Philippines,” enthused organizer Bluesmann who, along with the other “Crazy Norwegians,” have been life-long aficionados. “We could have done better in terms of audience attendance, but with the fantastic performance, it was all well worth it.”

With lessons learned, the group intends to mount another fest next year, hopefully with more bands, more drumming up of the event and more people coming. 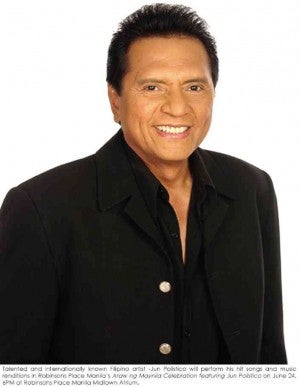 Robinsons Place Manila celebrates Araw ng Maynila on June 24, 6 p.m. at the Midtown Atrium with a special performance by balladeer Jun Polistico who will perform love songs, OPM hits, and classics like Frank Sinatra’s “My Way,” Tom Jones’ “It’s Not Unusual,” and Engelbert Humperdinck’s “Quando, Quando, Quando,” among others.

Swedish dance-pop duo Icona Pop will have a show at Raven Boutique Club, Bonifacio Global City, on June 26. Formed in 2009, the duo had a hit, “I Love It,” in 2013. For tickets: www.ravenmanila.com.