Talk show ‘On Your Marc!’ debuts on Lifestyle Network 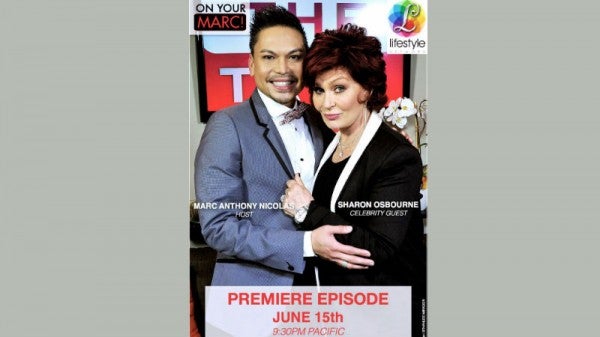 “As for the first season, I just want to bring the best of LA to the people,” stated Birkenstock. Lifestyle Network is broadcast across the country through satellite, cable and video on demand platforms.

In his hosting debut, Marc Anthony Nicolas, a three-time Emmy nominated producer for “The Talk” on CBS, transitions from behind the scenes to the front of the camera.

Starting out as a production assistant on reality series “Starting Over,” Nicolas moved to the casting seat at MTV. Three years later he worked on “The Tyra Banks Show.” He then landed the coveted role of producer for “The Talk,” becoming one of the youngest producers to dominate the talk show industry.

“When opportunity knocks, you open the door,” said Nicolas, “For ten years, my special place was behind the camera where I put people’s inspiring stories on the air. Now, I’m bringing all of the powerful and positive stories of incredible celebrities I’m proud to call my friends.”

Nicolas’ expertise as one of Hollywood’s most coveted producers and his curiosity and deep engagement with people make for a winning formula.

“I think your celebrity is only as good as your host,” explained Nicolas, on how to highlight and showcase the personality of each guest for “On Your Marc!” “So if I am having fun, they are having fun. And that’s what I want for all my celebrities.”

His secret to success is apparently simple. “Know everyone’s name,” he candidly quipped. “If you don’t know the name, then you’re out of the game!” His thoughtful and committed approach that has touched the likes of Sharon Osbourne, Beyonce, Kris Jenner, Perez Hilton, Naya Rivera, and many others now allows him to flip the script.

“The first time I met Marc, I knew he would make the perfect host. Working daily with Hollywood celebrities, he is uniquely able to bring out a side of them that few people get to see unless you’re within their circle of trusted friends,” said Philip Anthony, executive producer and co-creator of “On Your Marc!” “We are excited to bring this to the Filipino American audience.”

“We want to export shows to the Philippines,” stated Del Rosario.

“Yeah, I think that’s a good idea!” added Nicolas, on exporting rather than always importing shows and talent.

“We would love to have more Marc’s and Kara’s on the channel,” acknowledged Del Rosario.

“I see that there is just a huge lack of Filipinos and Asian Americans in mainstream and I’ve always wanted to represent that as a Filipina and Thai,” explained Birkenstock.

“In every industry and every corner of the world, there are brilliant Filipinos steering the wheel and changing the game,” said Olivia de Jesus, managing director for ABS-CBN North America. “We are proud that one of Hollywood’s finest producers is now reinventing his world – the world of talk – for Lifestyle Network.”

Lifestyle Network bills itself as a living and travel guide that understands the needs of the modern Filipino lifestyle. Its main thrust has been to showcase the skills of Filipino Americans.

“We are focused on food, self, travel,= and home. Unlike The Filipino Channel (TFC), that focuses on drama and news, which attracts a specific audience, like the grandmas and mothers,” introduced Del Rosario.

“We want it to capture the people’s attention, whether you are a first generation or second generation Fil-Am,” he added.

“Lifestyle Network has a pretty good base for it’s first year as a channel in the United States,” stated Nicole Wang, associate director of NBC Universal’s International Media Distribution. “I want to continue to work with them and widen the network,” added Wang.