(In the runup to the Gawad Urian on June 17, the Inquirer turns the spotlight on some nominees.) 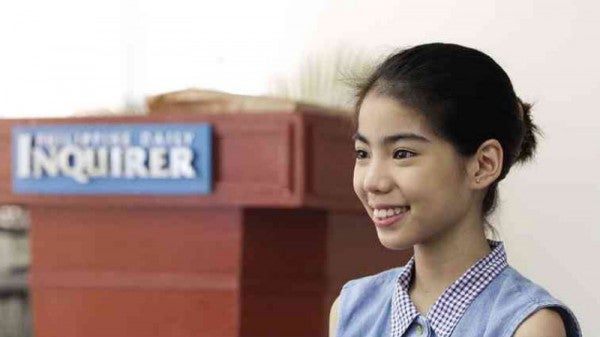 SHE WILL attend the Urian “for the experience” and to have snapshots taken with fellow nominees. ALEXIS CORPUZ

With refreshing candor, Teri Malvar, 13, admits that she is looking forward to attending this year’s Urian Awards on June 17. And it’s not just because she is nominated as Best Actress for her debut film, Sigrid Andrea P. Bernardo’s “Ang Huling Cha-Cha ni Anita.”

“I want to meet the big stars [especially] the other nominees like Nora Aunor, Vilma Santos and Jhong Hilario,” she gushes. “I want to see them even from a distance and watch the live performances. In other awards shows I’ve attended, singers like Angeline Quinto performed.”

She briefly met La Aunor at last year’s CineFilipino awards— where the newcomer bested the superstar in the Best Actress race.

THE CINEFILIPINO Best Actress trophy is displayed in their living room. ARNOLD ALMACEN

“I wanted to have a snapshot with her, but I was too shy,” she relates. “I hope to do that at the Urian.”

She downplays the fact that she beat the seasoned actress at the earlier indie fest. “I don’t want to be too confident and dwell on that,” she says. “I keep in mind that, though I won that night, I may lose in other awards shows.”

She insists that she’s not keen about her chances of winning an Urian trophy since she’s up against veterans more than double (triple and quadruple) her age.

Teri is the youngest; Rustica is on the other side of the age spectrum at 83.

“Sometimes I lose faith in myself,” Teri says. “Sometimes I’m sure I don’t stand a chance [against them].”

Mom Cherry Malvar, who is a bit player in movies and also acts in TV shows and commercials, explains, “She is nervous because she’s the only child nominated this year.”

“People ask if I am the youngest Urian nominee for Best Actress ever,” Teri says. “I’m not really sure.” 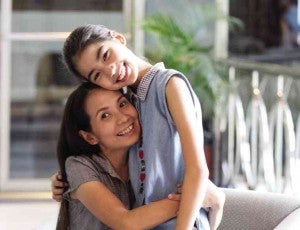 According to the website of the critics’ group Manunuri ng Pelikulang Pilipino (which hands out the Gawad Urian), other child actors have made the grade in the past. Dranreb Belleza (“Ganito Kami Noon, Paano Kayo Ngayon) vied for Best Supporting Actor in 1977; Serena Dalrymple (“Bata, Bata Paano Ka Ginawa?”) for Best Supporting Actress in 1999; Lester Llansang (“Saranggola”) for Best Actor in 2000; and Jiro Manio (“Magnifico”) for Best Actor in 2003. Serena and Jiro won in their respective categories.

Getting the Urian nod was a cliffhanger for Teri. The original list didn’t include her name; a second lineup rectified the oversight.

“I’m thankful even if I was a last-minute nominee,” she quips. “I am grateful to the critics for recognizing me and to my director for guiding me throughout.” 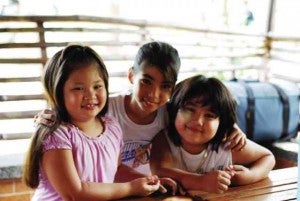 LENLEN Frial (left), Teri and Solomon Mark de Guzman were not allowed to watch their film during the premiere.

When the film premiered at the Resorts World Manila last year, Teri was initially not allowed to watch it due to its sensitive subject matter. Teri and the other children in the movie, Lenlen Frial and Solomon Mark de Guzman, were introduced to the audience during the pre-screening program, but were shepherded out when the lights were dimmed.

“We wanted to sneak in,” Teri recalls. “But we had dinner at Jollibee instead.”

She eventually got a peek, during a special screening at the University of the Philippines in Diliman. There she also met some esteemed audience members—Urian founding member and National Artist Bienvenido Lumbera and indie filmmaker and 2008 Natatanging Gawad Urian recipient Kidlat Tahimik.

“My mom got Mr. Lumbera to sign his book of essays from her collection,” Teri recalls.

After the showing, Teri got to chat with Kidlat, who urged her to remain true to her calling. “During the question-and-answer portion that followed, an audience member asked if I were a tomboy in real life. Kuya Kidlat said it didn’t matter if I were boyish or girlish in real life. He advised me to always be my little-girl self, enjoy acting, and act with passion.”

Teri, Solomon and Lenlen met child sensation Ryzza Mae Dizon when they guested in the “Ryzza Mae Show” on GMA 7. “She is funny and makulit,” Teri says. “She kept whispering in my ear.”

Teri’s indie movie led to another project, this time in the mainstream scene. She played the young Roxanne in the Kapuso series “Rhodora X.”

“It was only a short stint, but it was a good part. Markado,” Cherry explains.

Though she already has a Best Actress trophy displayed at home, Teri has no qualms about auditioning for different projects.

Sometimes she bumps into Solomon and Lenlen in the go-sees. (“I miss them. I’d like to hang out with them again,” Teri says.) A curious thing, since she was initially hesitant to even go to the “Anita” auditions last year. “She didn’t want to cut her long hair, which was one of the requirements,” Cherry says.

After much hemming and hawing, Teri eventually joined her mom (who also auditioned for, and won a small role in, “Anita”) because it was summer and she was bored at home.

“When Direk Sig asked if she was willing to cut her hair, she said yes immediately,” Cherry remembers.

Then the panel asked if she was fine with kissing another girl. Teri threw a quick quip. “I said, ‘Which body part?’ Everyone laughed,” Teri says.

When it came time to shoot that crucial scene with Angel Aquino, Teri cried. “Tita Angel took care of me. I consider her my second mom on the set. She promised to buy me cookies ’n’ cream ice cream after the shoot. She made me feel at ease. Later, she gave me caramel cake, too.”