Learning from the greats

When I started performing, the first task taught to me by my director was the same advice given to me by a journalist when I had wanted to become a writer at a young age: Observe people. Sit in an outdoor coffee shop, commute with the masses, follow strangers around and eavesdrop everywhere. This helps you build different characters, whether in letters or onstage.

Practicing both crafts, I have been lucky as a performer to be surrounded by veterans involuntarily showing me samplings of different characters that should guide any ingenue in the tedious path of show business: In celebration of “character” traits, here are artists I’ve regularly worked with, either in theater productions or corporate singing gigs, who portray model characterizations, not only for stage and script, but in real life.

Isay Alvarez and Robert Seña, the singing couple. They have big voices and a good sense of humor. They’re perfectionists who never stop working on themselves and each other. They have a strong passion for being Filipino, which shines through in the original plays they choose to star in and develop (through their own theater company, Spotlight Artists’ Centre) despite having come from a long stint in West End’s original production of “Miss Saigon” in their early years. 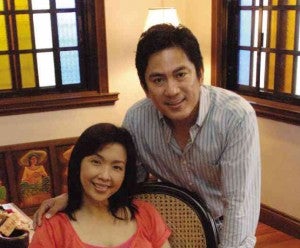 SEÑA AND ALVAREZ. Strong passion for being Filipino.

They use their take-home knowledge to demand higher standards and professionalism when doing local shows, but have never lost the inherent and highly effective Pinoy trait of making lambing and suyo when working with others.

Michael Williams, another “Miss Saigon” alumnus, is currently belting it out as a drag queen in “Priscilla, Queen of the Desert,” which, knowing his fine taste for feathers, is easy-peasy perfect casting—but any lady he has ever directed or worked with wishes he was a man they could marry!

This must be because, in an industry with a rampancy of balimbings and mysterious metrosexuals, it’s always a turn-on when you see how sure a man is of himself. It also doesn’t hurt that he is a brilliant actor, because if macho is what you ask from Michael, then macho is what he will deliver.

Lou Veloso is the comedian you worship. We have seen him turn teary-eyed from hearing old songs during the “Katy! The Musical” revival, and watched him throw in ad libs during rehearsals that ended up as permanent lines in the show. When you find comedians simply in love with their work, and are not there only for the jokes, it’s a real treat!

Dulce is no “diva.” Her humility will put any strong woman to shame. She has reached the heights of success yet still maintains her God-given gift for being grounded, and it is a gift that transcends even her talent for singing “Ako Ang Nagwagi.”

Tirso Cruz III is someone everyone would want to hang out with—it doesn’t matter what age bracket you are in! I could elaborate more, but who needs more details when you’re already labeled the “cool” guy?

Ogie Alcasid, the charmer. We have seen him charm ladies of height and stature, head over heels, regardless of what shortcomings one would consider, but it is worthier to pay attention to how he charms audiences. When you see it happening, there is no wondering how he gets even an elusive Songbird to stop flying—and fall in love with him!

Celeste Legaspi seems to roll out a red carpet of discipline and grace before her wherever she walks. There’s that seamlessly petite package of class, beauty and talent she naturally showcases, coming from an era when hard-sell packaging was no norm.

To carry this flair through decades is what you call timelessness, and to sustain timelessness takes momentous discipline!