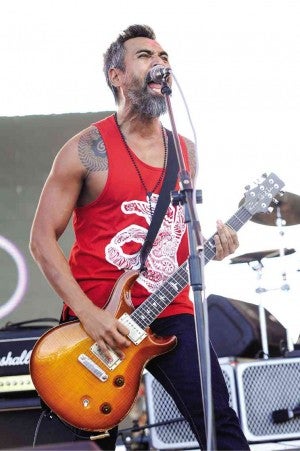 While some recent major local events brought some of the biggest names in the rock or electronic dance music scene, the recent Wanderland Music and Arts Festival once again presented a tight roster of indie bands that managed to build a niche following in the country.

Most names in the lineup would likely not ring a bell among casual music listeners, but for thousands of fans who trooped to the vast events grounds of Circuit Makati as early as 12 noon, such acts by Chocolate Grass, Brisom, Techy Romantics, The Ransom Collective and Woody Pitney were worth braving the blistering heat for.

We arrived at the event just as local rock artist Franco was wrapping up his set. He was followed by the guitar-toting English indie rock-folk pop artist Lucy Rose. The dainty songstress had an incredibly delicate tone, her music going from breezy to whimsical to somber. The setting sun and a slight drizzle made her performance of “Bikes” and “Shiver” all the more enchanting.

The music of The Paper Kites, a five-man indie-folk band from Australia, was similarly wired as Lucy Rose’s, though more intricate with layered instrumentation, embellished with soft percussive beats, occasional synths and rustling rattles.

Frontman Sam Bentley’s vocals were gentle. He moved languidly with the music. Among the crowd-pleasers the band dished out were “Bloom” and “Featherstone.”

The music festival was better organized than last year’s. That was immediately noticeable as soon as you entered the gates and saw how everything was laid out. 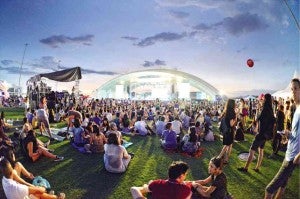 The producer, Karpos Multimedia, made sure to give everyone an experience as enjoyable and comfortable as possible. Although there was a wide variety of food stalls around the area, there was hardly any need for them as free drinks and snacks were regularly handed out throughout the event.

Last Dinosaurs, another Australian act, played a nine-song set that had most of the girls near the stage singing along and dancing. It was the band’s second visit to the country, said vocalist Sean Caskey, who played “I Can’t Help You,” “Time and Place” and “Zero,” among others. The sound was bouncy and infectious, with noticeable influences from Phoenix and The Strokes. The performances, however, were marred by Caskey’s singing, which tended to go off-key. 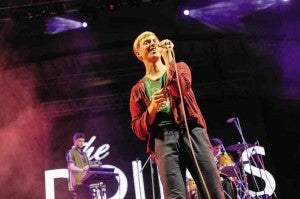 Her long black locks flying every which way as she moved on stage, Agarrado’s alluring vocals were in full display in “Mr. Musikero.” Marco was just as beguiling in “F.A.S.T” and “December 2, Chapter VII.”

Unlike last year’s fest, when the venue had two sections—VIP and Gold—Wanderland’s second installment had a one-price ticket system allowing people more freedom to roam around. If the act onstage did not interest them, they checked out the various tents, lounges and game booths that lined the perimeter of the two-hectare concert grounds.

Revelers squealed as they popped colorful balloons with darts, shot some hoops, knocked down a stack of cans and threw themselves against a Velcro wall. A rowdy group of young men filled two small, white tents, cheering and jeering at each other in a game of ’tails (cocktails) pong.

Near the stage, a carousel carried women wreathed in flowers and sipping beer from plastic cups between giggles. 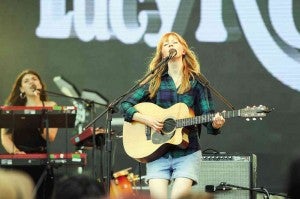 Inside the air-conditioned Wonderlounge, a tent set up by sponsor Globe, party-goers shimmied to the dance beats. The lounge served as a nice little stomping ground earlier where  musicians Moonwlk, June Marieezy, Kate Torralba and the incredibly talented Bullet Dumas showed off their wares.

For some, the music was just a background as they hung out with friends. Many huddled on the  grass, drinking, laughing, eating and smoking. Some were content to just lie on the ground, unmindful of giddy teenagers taking selfies beside them or frisky Caucasian couples making out. 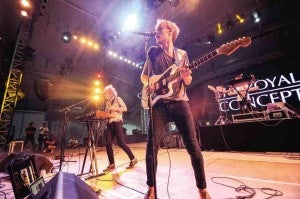 The festival, as expected, attracted some of the metro’s most stylish youngsters—some strutting like they were on an invisible catwalk. It was not so surprising to see local celebs walk past, like Isabelle Daza, Georgina Wilson, Jake Cuenca, Raymond Gutierrez…

To stand out from the sea of cropped tops, floral dresses, printed skirts, Hawaiian shirts and dangerously short shorts, some attendees came in costume. One was dressed à la Elvis Presley while another wore a golden jumpsuit that looked like it could burst into flames at the slightest touch. 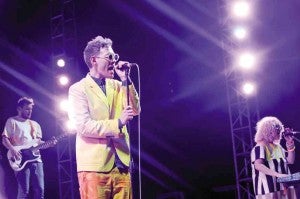 Royal’s music, as a whole, sounded zippier, was more accessible, making use of distortion on the vocals every so often. “We have never been this far away from home and it’s great. We feel like we’re in wonderland,” Larson told the stoked crowd.

Yet another band from Down Under, Architecture in Helsinki, dressed in colorful outfits, wasted no time pumping the air with sprightly, glossy synths mixed with 1980s disco-pop and funk. The bubbly band had everyone dancing to such catchy tunes as “Escapee” and “Before Tomorrow,” which saw keyboardist Kellie Sutherland taking over the vocals from Cameron Bird.

Last year, Australian band The Temper Trap had the honor of closing the first Wanderland fest; this time the honor belonged to the New York-based The Drums, led by Jonathan Pierce. “On a positive note, let’s sing about my dead best friend,” he said cheekily as he introduced the song “Best Friend,” which evoked the music of The Smiths, especially when Pierce crooned “And how will I survive, survive, survive…?” 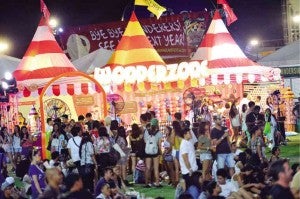 Brisk and captivating, The Drums did 13 more songs, including “Me and the Moon,” “If He Likes It Let Him Do It” and “Let’s Go Surfing.” When they closed with “The Future,” a couple of indefatigable fans roared and begged for more.

Apparently, more than 12 hours of music was not enough for some.