Richard Gutierrez: ‘I am a proud father’ 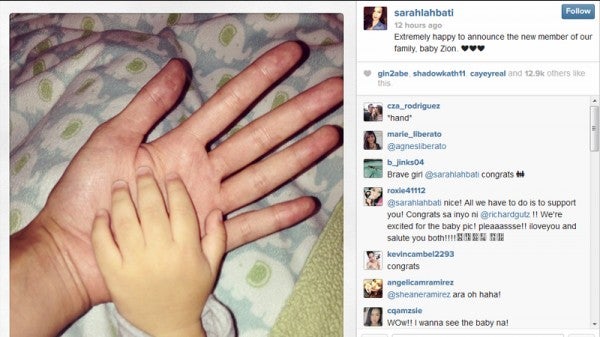 MANILA, Philippines – Celebrities Richard Gutierrez and Sarah Lahbati have finally confirmed rumors that they are now parents to a baby boy.

“A lot of people think that Sarah left the country because we are having a baby and she’s pregnant. I just want to set the record straight and tell everyone that I’m a proud father of baby Zion,” Gutierrez said during the pilot episode of “It Takes Gutz To Be a Gutierrez.”

He said they wanted to share the news on their own terms instead of letting it become a “tabloid circus.”

After the show was aired, members of the Gutierrez family shared their thoughts on the revelation.

“The cat is out of the bag!!! So happy for @richardgutz & @sarahlahbati,” said Ruffa Gutierrez on Instagram.

Meanwhile, Richard’s brother, Raymond, announced the baby would appear in the show’s next episode.

Lahbati also shared a photo of the baby’s small hand resting on what seems to be his father’s hand.

“Extremely happy to announce the new member of our family, baby Zion,” she said.

The actress thanked fans who understood and supported them.

“Once and for all, I do not care about the hate tweets and all the ‘poor baby bakit ganito, ganyan’ I just want to make it clear to you that from DAY ONE, we took care of him, loved him, protected him and gave him everything, until now,” she posted on the photo sharing site.

“WE NEVER DENIED HIM. We just wanted to keep our privacy. Oh well, I love my family and I’m extremely happy and blessed that we were able to finally share our life with everyone. Spread the love,” she added.

Rumors were rife that Lahbati was pregnant after it was announced that she would be taking a break from acting. She spent a year abroad, mostly in Geneva, Switzerland where she was born.