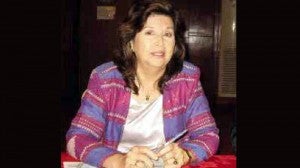 MANILA, Philippines—For whom the newspaper falls?

Veteran actress Boots Anson-Roa, 69, is set to press charges on Friday against Australian-Canadian Ross Hemingway for allegedly slapping her with a newspaper.

The alleged assault took place on May 22, at around 9:43 a.m., at the lobby of the condominium building in Barangay Kaunlaran, Quezon City, where they both reside, based on the incident report by Leopard Integrated Security Services Inc.

The report said Anson-Roa, after coming from the gym, went to the lobby and read the front-page stories of a newspaper she casually picked up at the reception desk.

When Hemingway, who was already carrying a newspaper, entered the lobby and saw her, he allegedly told Anson-Roa, “What the f_ck are you doing? Why are you reading other residents’ newspaper?”

Anson-Roa reportedly didn’t mind him because she didn’t know it was her who Hemingway was addressing.

Hemingway then allegedly slapped the upper left arm of Anson-Roa with the newspaper he was holding before going to the elevator and proceeded to his unit.

Stunned, Anson-Roa failed to react. The whole incident was witnessed by Reycar Dinglay, the security guard assigned at the lobby that day.

The incident report, signed by detachment commander Richard Ramon, also said prior to Anson-Roa, Hemingway did the same to Emma Blanco, another resident of the condo building.

Anson-Roa is set to marry lawyer Francisco “King” Rodrigo on June 14 this year.

As of posting, Hemingway hasn’t issued any statement.