The blues never had it so good in Manila. Had there been a blues bar in Florence during the Renaissance, it might have looked and felt like this one.

At a table by the stairs, buddies Elwyn Zalamea and Ricky Avancena were leisurely talking lineups for the next “Blues and Roll Sessions” super gig. Over at the bar, Rickie Cui and Haro Echter were probing logistics and strategies for blues uprisings at the grassroots level.

At a table just to their left, Johnny Alegre was animatedly articulating to a very interested Thorleif Don Bluesmann the nitty-gritty of producing a live album. On a pair of sofas fronting the stage and a coffee table laden with vodka, brown bottles and bowls of home-cooked seafood soup sat Ole Torbergsen and Tom Harry Sund, discussing the weather—more specifically, when to best launch the next “Manila Bay Blues Cruise.”

At a nearby table, the young “Hoochie Koochie” Mykell Bryant Gozon was regaling listeners with his busking exploits at BGC. All the while, on stage were the best live blues jams you wouldn’t hear anywhere else in the metro. 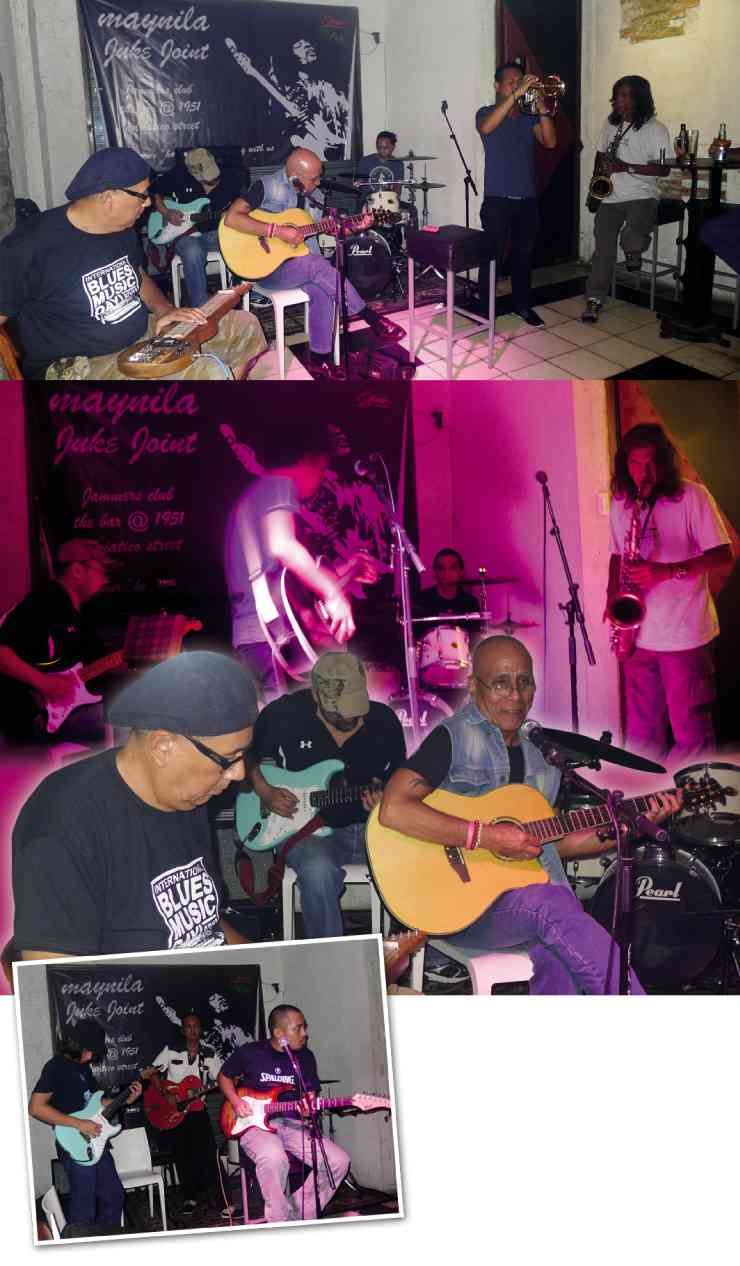 Thus was the scene at the “Maynila Juke Joint Jam,” a strictly invitational party for musicians and serious citizens of the local blues community, held recently at The Bar @ 1951 on Adriatico St. in Malate, Manila.

Hosted by retired Norwegian expats who have made the country their home and support local blues with a passion, the monthly gathering is a venue for blues musicians to chill, have some fun, exchange ideas, try out new chops and play what they want, how they want it.

“Maybe we’re just a bunch of crazy Norwegians, but it’s our way of giving back to the musicians,” offered Torbergsen, Viking beard and all. Along with compatriots Bluesmann, Sund and Kjell Skarshaug, he has been part of Manila’s growing blues scene for the past three or so years.

Coming from various parts of Norway, the four pals met for the first time in (where else?) one of Manila’s busiest blues joints. Aside from being very visible at bar gigs and special events, the transplanted blues aficionados have been quietly helping local musicians. In fact, they dropped a huge bundle in one fund-raising auction-concert last year for Supertyphoon “Yolanda” victims.

Chuckling, Torbergsen related: “[The monthly parties] started last year as a small get-together in an apartment-garage in Parañaque that belonged to one of the guys—until the neighbors complained that we were too noisy. They might have thought twice, had they known that it was Wally Gonzalez and Nitoy Adriano jamming.”

The Norwegians eventually took their thing to the very blues, jazz, progressive and alternative music-friendly The Bar @ 1951, contracting the place every first Monday of the month. “[Here], musicians can try out new riffs and ideas together before an appreciative audience. Different blues styles meet, and young musicians learn from older ones,” observed the soft-spoken Bluesmann (it’s his real name, too).

Things picked up when Johnny Alegre, Paolo Manuel and JR Oca embarked on the jazz blues anthem “All Blues” with terrific solos from the two guitarists.

The youngsters had their fun as well. Bleu Rascals’ Oliver Salaysay and Jay Garcia collaborated with Ian Lofamia Band’s Arvin Austria to back up Hoochie Koochie Mykell Gozon and Coffee Break Island frontman Paul Puti-an in a series of rockers. In one instance, they transitioned from “Have You Ever Loved a Woman” to “Summertime” with a nifty solo from Badilla on harmonica, and somehow ended up playing Jimi Hendrix’s “Purple Haze,” without missing a beat. For sure, the veterans learned something from the young ones, too.