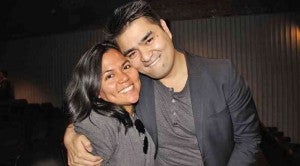 Last May 3, we caught Jose Antonio Vargas’ brave documentary, “Documented,” about his status as an undocumented immigrant in New York. Some theaters are releasing the film before its CNN cable broadcast this summer.

We were glad to see the film’s cinematographer and co-producer, Clarissa delos Reyes, who was our classmate in NUT’s Directing Workshop more than a decade ago. Clar also worked on the principal photography of John Sayle’s “Amigo.”

In shooting a documentary, she shares: “You’ll never know what you’re gonna get, so you always have to be on your toes. I love narratives, but I enjoy shooting docus, where you look for things that make a scene.”

As a female cinematographer in New York City, she confesses: “It isn’t easy if you’re non-American and a womanthere has always been gender bias in this profession. So, you have to do what you can and learn to hustle!

“Vargas is a good collaborator. He always tried to involve me in creative decisions. He had limited resources and worked without a green card, but he made the most of what he had. It didn’t stop him from dreaming big!”

“Documented” puts a human face on thousands of immigrants who face deportation every day in the US. Vargas is a Pulitzer prize-winning journalist who, in 2011, decided to reveal his “TNT” (tago ng tago) status in a New York Times essay, because he could no longer bear to lie about it! His revelation pressured the US Congress to take action on the Dream Act, which provides conditional permanent residency to certain immigrants.

One of the film’s tender moments documents Vargas’ relationship with his mother, Emelie Salinas. They have not seen each other for 20 years, with Vargas consciously “avoiding” his mom by not accepting her Facebook request.

Among the movie’s highlights is their first Internet video calland it is heartbreaking!

During the Q&A, the former Washington Post reporter confessed, “I don’t want to be called courageous or inspirational, because I know how America works. You put people up, then you knock them down. All I want is to be a free person who can go wherever I want to. I want to liberate myself from this thing I’ve been enslaved to!”

In 1993, Vargas was sent by his mother to the US to live with his grandparents. At 16, he learned about his fake papers when he applied for a driver’s license and was told never to come back.