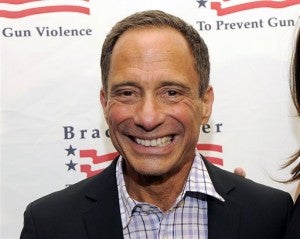 This May 7, 2013 file photo shows TMZ.com founder Harvey Levin at The Brady Campaign to Prevent Gun Violence Los Angeles Gala in Beverly Hills, Calif. Levin is co-producing a new reality series, “Famous in 12,” so named for the number of episodes on the CW that the good-looking clan from sleepy Beaumont, California, will get to prove themselves. AP

NEW YORK— Exactly what does it take to make it in Hollywood? Thanks to Harvey Levin, one fame-hungry family is about to find out.

Levin is co-producing a new reality series, “Famous in 12,” so named for the number of episodes on the CW that the good-looking clan from sleepy Beaumont, California, will get to prove themselves. But they won’t be alone: Levin’s TMZ machine will help.

The Artiagas family, a writer-mom and model-daughter among them, were picked from among 10,000 videos submitted more than a year ago, Levin said Thursday by phone from Los Angeles.

He called the series a “social experiment” to test the boundaries of building an empire on limited to no talent.

“I don’t think any of them can make it on their talent but they can certainly make it off of their will, and they have so much will and ambition,” he said. “And they’re game to scheme and that’s what it takes. We’re going to see whether the scheming works.”

The series from Levin and Renegade 83 will premiere June 3. Levin promises hijinks, including one or more family members doing something to grab the attention of a celeb while said celeb is stopped at a red light. And there will be social media, with the family tweeting up a storm and appearing on TMZ shows and its website.

“We wanted to take a family that had no connection whatsoever to Hollywood and use the principles we’ve seen over the last nine years and see if they can pull it off. I don’t know if they will or won’t,” Levin said.

TMZ will “give them a road map on where to go, ideas, what to do, but they have to make their own luck,” he said.