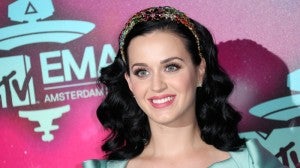 WASHINGTON—Thanks to the generosity of a US forklift truck dynasty, pop star Katy Perry will soon take pride of place in the dignified National Portrait Gallery in Washington.

“Cupcake Katy,” an oil-on-linen portrait by New York artist Will Cotton, will go up on June 18 as part of a rotating display of recent acquisitions, the museum said Wednesday.

The painting, completed in 2010, is being gifted to the National Portrait Gallery — part of the Smithsonian network — by the James Dicke family, whose wealth and large art collection derive from a global forklift truck business based in the state of Ohio.

Sajet added: “Sweet but no mere piece of ‘candy,’ the woman is accessorized but not labeled — she’s the one in control.”

Perry, 29, is among the biggest names in pop music today, with a raft of Top 10 hits including “California Gurls,” “Teenage Dream” and “Firework,” and a reputation for wildly colorful shows.

She’s scheduled to bring her ongoing Prismatic concert tour to Washington’s Verizon Center arena — across the street from the National Portrait Gallery, as it happens — on June 24 and 25.

ADVERTISEMENT
Read Next
‘Star Wars’ fans to get chance at cameo
EDITORS' PICK
Notice of 2020 regular meeting of stockholders June 18, 2020
SM prepares for ‘safe malling’
Leveling up your ‘lutong bahay’ with the kitchen companion you never knew you needed
NBI, Immigration to join hunt for ‘underground’ medical clinics
2 Chinese nationals arrested in raid on another unlicensed COVID-19 hospital in Pampanga
P2.2 trillion in losses: Cost of COVID-19 impact on PH economy
MOST READ
Revillame tells Roque: ABS-CBN is in my heart despite being in rival network
NCR is ready for GCQ — Palace
LOOK: Robredo, Vico Sotto, check Community Mart ops in Pasig
Año: Quarantine passes not needed in GCQ, movement restricted to essential travel
Don't miss out on the latest news and information.