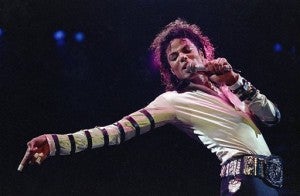 This is where the image and likeness of the late Michael Jackson were used right!

Even a hologram of the late Michael Jackson projected more “magic” and “electricity” than any of the other live performances at the recently concluded Billboard Music Awards 2014.

Seriously, I ended up watching it more than a dozen times. The “live” holographic performance by Michael Jackson of “Slave To The Rhythm” was a previously unreleased track taken from his second posthumous studio-release ‘Xscape’.

Watching it felt surreal and had me totally spellbound. Seeing a younger and healthier version of the late King of Pop as I had remembered him when I, in my younger years, would watch his music videos like “Jam”, “Black Or White” and “Remember The Time” took me back to that wonderful and exciting time again in popular music.

The experience made me happy and sad at the same time. It almost could have made me jump from my seat in disbelief, “He’s back!” and yet, reality checks in and I had to pull back from my own excitement knowing that he is no longer really around.

Surely, everyone who has seen this groundbreaking holographic performance had a momentary surfeit of mixed emotions as well. And without doubt, too, those fortunate ones who were present at the Billboard Music Awards 2014 had the more palpable experience of “seeing” and “feeling” Michael Jackson perform again before them.

When the cameras panned on the audience, we saw how moved and even stunned some of them were upon seeing that dazzling and spectacular holographic performance of the King of Pop. The powerful energy of Michael Jackson seemed to diffuse out to them.

And on that night, we are all reminded that Michael Jackson’s “spirit” lives on!