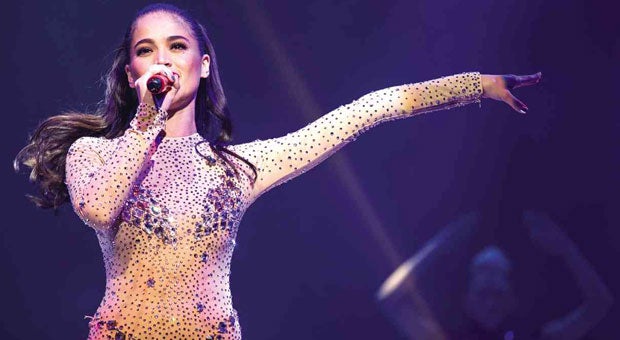 The louder she squawked, the harder they applauded… and laughed.

That was pretty much how things went down during Anne Curtis’ second major solo concert at the Big Dome on Friday night. The title of the show, “The Forbidden Concert Round 2: AnneKapal,” was an unabashed heads-up—Anne would perform songs by divas Whitney Houston and Barbra Streisand but with no guarantees that even one would sound good. 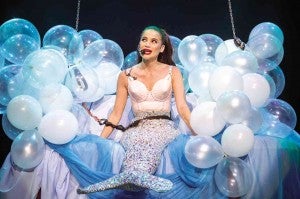 At least she looked good while doing that. What she lacked in talent, she made up for in—her own words—“bonggang costumes.” And there was certainly a lot for the eyes to feast on: sparkling, sequined one-piece suits, gowns that lit up, flowing body-hugging outfits.

The costumes were just a part of the equally elaborate production numbers that the actress-TV host described at a press con earlier this year as “buwis-buhay” (life-threatening). The stunts, most of which involved harnesses, were so risky, according to Viva Concerts, the production outfit, that it had to secure a multimillion insurance policy for Anne.

Anne didn’t simply walk to center stage; she descended from the air. To a round of laughter and applause, she signaled her arrival

GETTING wet, courtesy of a water-splashing prop

with the Whitney Houston torch ballad “I Will Always Love You” with her half-cat wail, half-yodel of a voice. On that screeching note, the show began.

The self-confessed frustrated singer pulled out all the stops in the succeeding Cirque du Soleil-inspired act, which had Anne striking poses, twirling, flipping and contorting her body in the air and across the venue while singing Katy Perry’s “Dark Horse.” The aerial exhibition ended with Anne breaking into Rihanna’s “Diamonds” while hanging upside down. 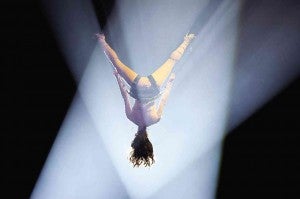 SHE SANG Rihanna’s “Diamonds” while hanging upside down.

Anne pushed through with a promised  opera number—“Nessun Dorma,” with Robert Seña—much to everyone’s amusement and bemusement. Anne had everyone in stitches as she delivered “Nessun Dorma” with the affectations of an opera singer. This number, which she couldn’t have gotten away with anywhere else, was touted as a “showdown.” If volume level were the sole criteria for deciding the victor, we would rate it a tie.

Anne performed “Let It Go,” from the animated film “Frozen,” wearing a costume that illuminated each time the song hit a peak. She then dished out a passable Spice Girls medley, for which she changed into costumes that evoked the mythical creatures she portrayed in the fantaserye “Dyosa”—a centaur, a harpy, a mermaid. 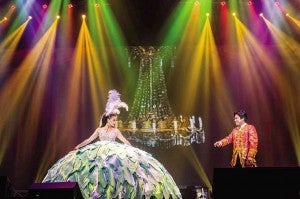 To be fair, Anne was in tune (at least she seemed to be) most of the time, and periodically lucked out into hitting high notes. It’s just that her timbre is naturally, and incredibly, shrill and strident. At best, she sounded like an eager young girl hard-pressed to  impress in a school recital.

The months leading up to the concert was a bumpy ride for the 29-year-old Kapamilya star, who earned the ire of not a few netizens after reportedly figuring in drunken squabbles with fellow celebs. To her detractors, Anne dedicated the hit, “Titanium.” 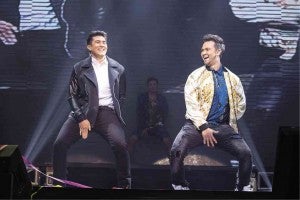 “You all stayed with me through thick and thin. Thank you for keeping the faith,” she said, choking up. She tearfully performed the song, putting emphasis on the words, “You shoot me down, but I won’t fall.”

The novelty of her bad singing was bound to eventually wear off, and there was only so much acrobatics she could do in two and a half hours. Luckily, Anne’s duets with guests were fun and had good energy to them, which kept the concert afloat. There was Martin Nievera with a mash-up of “Without You” and “With or Without You”; Ogie Alcasid with “Blurred Lines” and “We Can’t Stop”; Regine Velasquez-Alcasid with “On the Wings of Love.” 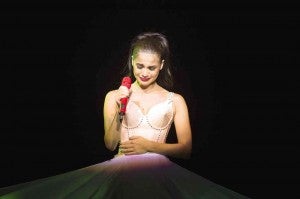 SHE BECAME emotional while singing “Titanium.”

whose performance of “Forevermore” made Anne’s rendition of “My Way” seem awe-inspiring.

Anne dedicated the song “Wind Beneath My Wings” to her mother, before ending the show with another Whitney classic, “One Moment in Time.” When the audience clamored for more, Anne returned onstage, crept on top of an apple prop and sang Aegis’ “Basang-Basa sa Ulan”—soaked in water spewing from the fake apple’s stem.

The bubbly celeb has always loved singing. And although it obviously didn’t love her back, she always made it a point to have fun whenever she got the chance to go onstage. 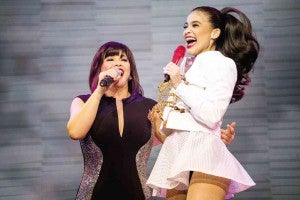 Her words: “Dreams do come true, but it’s up to you to make it happen… Wala namang masama kung meron kang konting confidence,  ’di ba?”