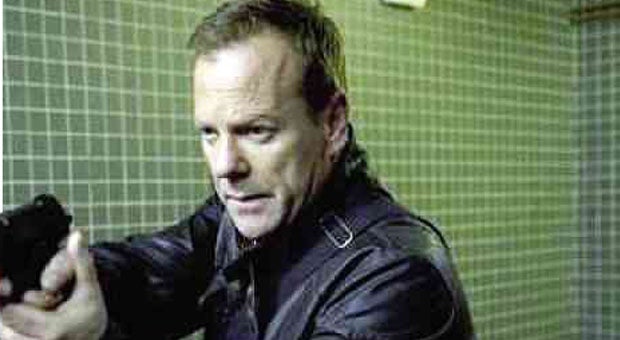 Terror-smashing super-agent Jack Bauer is back, combating malevolent forces that threaten the United States anew in the revived “24,” a shorter season dubbed “Live Another Day.”

The clock restarts after eight seasons fraught with seemingly insurmountable challenges, the 24 episodes of each season corresponding to a full day. This one has fewer episodes—only 12—so it remains to be seen how the new format compresses the story and adjusts the time.

Jack has fought terrorists of various creeds, agendas and nationalities, and sacrificed much for the security of many. By the end of the series in 2010, the character was on the run, a former agent forced to “retire” after a complicated mission.

In the first episode of “Live Another Day,” Jack is tracked and, after a serious scuffle, nabbed by the London-based division of the CIA. His presence in England coincides with that of the visiting American president (William Devane), a former ally. But Jack’s immediate concern is busting out his former CTU (counter-terrorist unit) colleague, techie extraordinaire Chloe O’Brian (Mary Lynn Rajskub), detained at the same CIA headquarters.

It doesn’t take long to remind viewers—and unwary new characters—that Jack Bauer is uncommonly tough and dangerous. By the time he totes a gun again, it is clear to longtime devotees that Jack is indeed back, poised to make the world a safer place, ready to get his hands dirty for the greater good!

It’s a promising restart. Sutherland and Rajskub are joined by new cast members and rejoined by familiar ones. Yvonne Strahovksi (the serial poisoner from “Dexter”) stars as a CIA agent who figures out Jack’s ruse and rescue mission. There’s Stephen Fry, charismatic as the British prime minister; and Michelle Fairley (Catelyn Stark from “Game of Thrones”) appears as a major villainess. Also back is Kim Raver as Jack’s traumatized ex and the president’s daughter Audrey.

In true “24” fashion, Jack Bauer chases bad guys while again convincing law enforcers of his innocence and the veracity of his new task. Sutherland still delivers with the physically demanding action hero role, and quickly reacquaints with that long-missed combo of fidgety problem-solving and focused single-mindedness. And it is just as elating to see Rajskub return to her fan-favorite character, now a goth-ish “hacktivist” who helps Jack for the nth time.

A matter of time

It’s only a matter of time before a traitor is revealed—there were a couple of moles and double agents before, after all. A president with exploitable weaknesses; a weapon in the wrong hands; a dastardly plot to discredit and decimate—they’re all there, refurbished for the revival.

While it primarily appeals to fans, this “24” is accessible enough for new viewers, who should check out earlier seasons anyway for a more complete viewing experience.