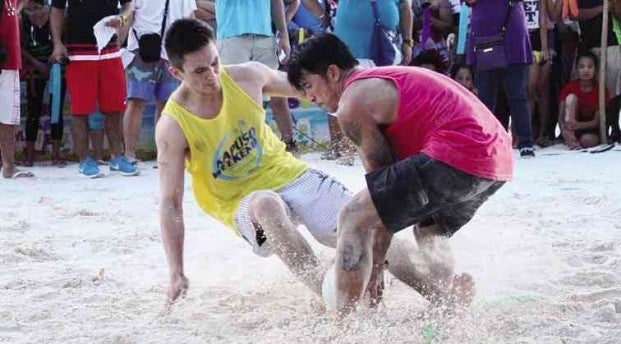 Performing in the picturesque outdoors can be quite tricky, even for seasoned artists like Regine. “It can be tough, especially when the wind is blowing,” she agreed. 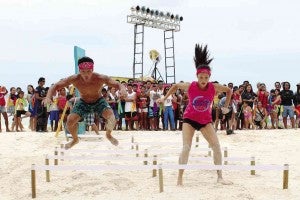 True enough, just when Regine was about to take the stage, the skies turned dour and it started to drizzle. But Regine was quite the trouper. Trifling droplets of rain weren’t enough reason for her to let the crowd down.

Singing in the rain

“Tuloy ang show!” she assured the fans, who responded with resounding applause. She then belted out a few lines from Aegis’ “Basang-Basa sa Ulan.”

In a white cotton dress and sporting a new fringed hairstyle, the 44-year-old concert veteran worked the audience deftly with the upbeat “Ako’y Iyong-Iyo.” It started to pour toward the end of the song. We were sure the show would be cut short.

Not a chance. Regine grabbed an umbrella from a fretful production staff member and continued to sing. At this point, she picked “Hulog Ka ng Langit,” a track from her latest album of the same title. “This is dedicated to my son, Nate,” she said. 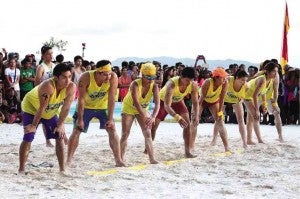 Regine’s Boracay stop was part of her tour for GMA Regional TV, which saw her performing in Davao City, Vigan and Dagupan earlier this year.
“It was fun meeting my fans in the provinces,” she said. “Not all of them get the chance to see me live in concerts.”

Outside of Regine’s miniconcert, “Kapuso Weekend” pitted GMA 7 stars against one another in a series of games over two days. In the sweltering heat, they raced and navigated obstacle courses, engaged in water joust battles, agawan-bola and many other fun events.

The 16 Kapuso talents who joined the festivities were grouped into two teams. Puka Beach was composed of Isabelle Daza, Mike 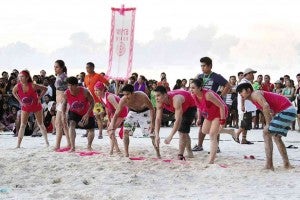 The games brought out the athletic and competitive sides of the celebrities. Among the most hotly contested games was agawan-bola, which had Tom forcefully tackling his former “My Husband’s Lover” screen partner Dennis, who refused to give in without a fight.

According to Oliver Amoroso, AVP and head of GMA Network’s Regional TV-Integrated Marketing Division, the Boracay event was a bonding activity. “It’s really designed for them to have fun, [and] some of the stars were ‘requested’ by fans here via social media.”

The event, he added, was mounted in cooperation with the municipality of Malay and Boracay Foundation Inc. 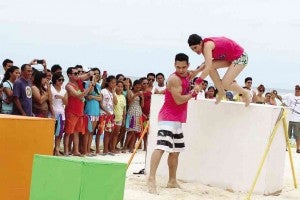 For many star-struck fans, Luau Night— which capped the first day of challenges— was the perfect opportunity to ogle and even get close to their favorite celebs via various riotous and sidesplitting games prepared for them.

One involved manic dancing with Rochelle and LJ; another one had fans skittishly lifting the shirts of Rafael and JC. A female fan got a little too close, in fact, and planted a quick kiss on JC’s abs, to the hunk’s—and everyone else’s—surprise.

Aside from the games, the stars treated the enthusiastic crowd to song-and-dance production numbers. The following night, White Beach Team was hailed champion of the games. JC and Isabelle were declared male and female MVPs, respectively. 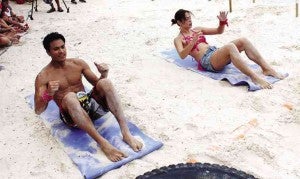 Boracay also served as the initial stop for GMA Regional TV’s first Kapuso Island Tour in Panay. The tour’s two-day kickoff, held May 11 and 12, featured a different set of activities that included a volleyball tournament, sundry beach games, a Zumba session, and a comedy night with Tom and Dennis.

“We will tour different batches of stars around Panay island… Kapuso celebs will entertain the people as their way of giving thanks,” said Jonathan Cabillion, station manager for GMA Western Visayas.

A beach cleanup was held on May 12 as part of GMA’s advocacy of helping in the preservation of Boracay.